A journey to White Island...

These images were taken in 2015 with White Island Tours from memory. They haven’t been shared before except for a couple on social media at the time. The reasoning for doing it now is that the image software that am using has developed so much that these older crop sensor files can now be developed to a higher standard than ever before, a saving grace is that i always from the start photographed in the RAW format which allows for far more latitude to clean the artifacts from these files. It is a stark environment which in turn means to tell the story the images must with-in reason match the feel of this place with-out being soft and with definition. Hopefully they convey that.

I am releasing these images now because of the improvement in editing programs but I would like to acknowledge the lives lost when White Island erupted in 2019, I can only imagine how it would have been like for the people that were there. My condolences to all families who lost loved ones on that day and much respect to those brave heroes who risked their lives trying to rescue as many as possible. Hopefully all those recovering from injuries do so that they can lead fulfilling lives as much as possible.

I am not am not trying to revive any debates about visiting White Island as a tourist, it is just my intention to show those who will now never have the opportunity to see what the environment there looked like. One thing that images will not convey is the sulfur smell, we all had gas masks to put on if the wind blew the gas in our direction which we all seemed to use at some point of the tour, especially beside the crater itself. You definitely knew you were in a sulfur environment, a bit like an overpowering smelly day at Rotorua.

The images with people in them are not for sale or down-loading. Any others please contact me for options. 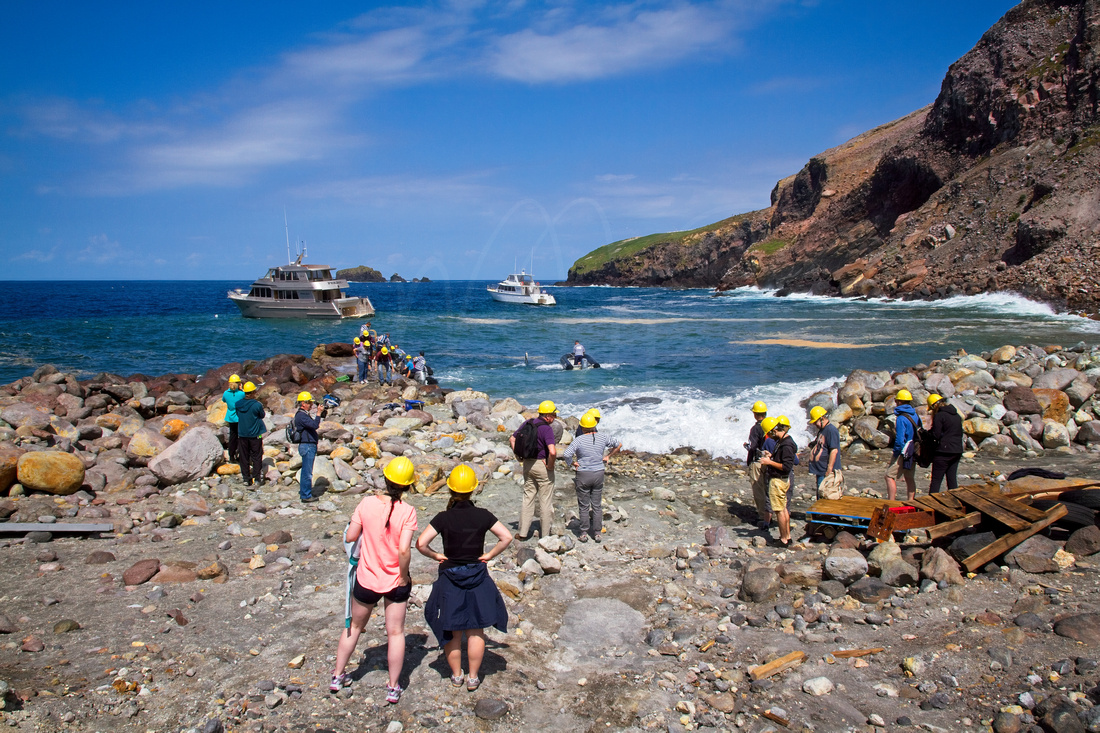 White Island landing area.This is where the tourists were landed by rubber boat from the launch we travelled on from the mainland onto a basic concrete and rock jetty of sorts.

The landing place from the launch that brings us from Whakatane is rather rudimentary as its just some concrete and rocks with some bits of rope to grab hold off from memory. Everyone is ferried across in small dingy loads so that takes a little while. Not the best in a south easterly methinks. 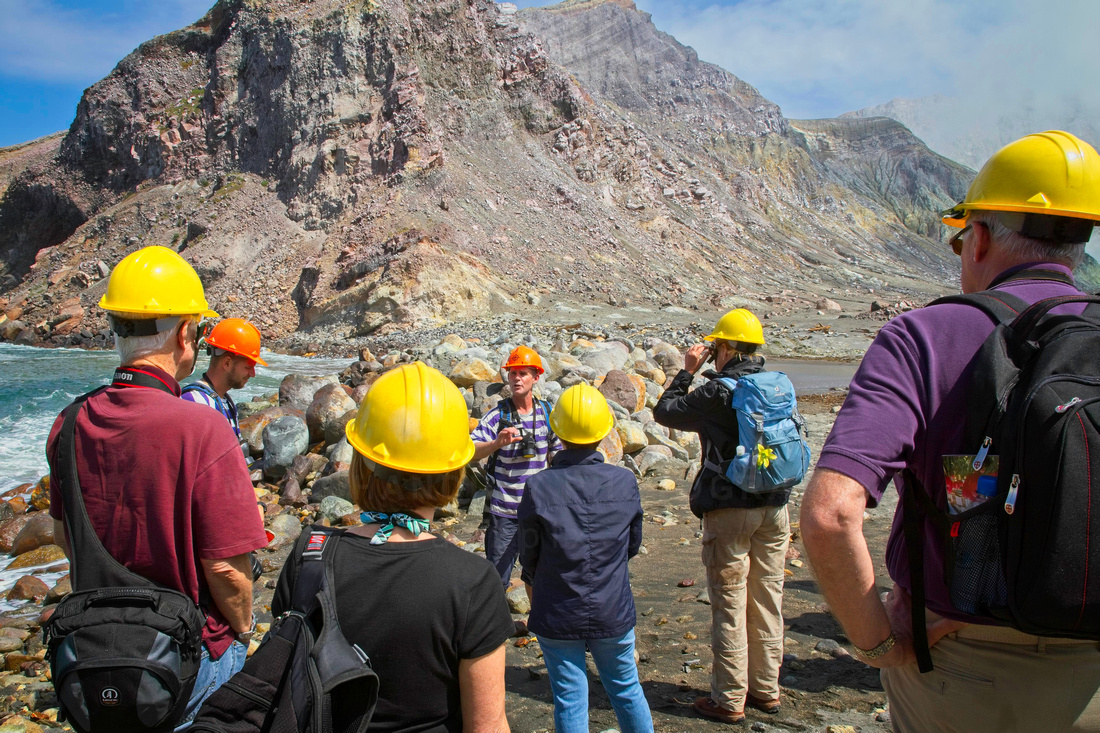 With everyone safely on the island and dried off somewhat its a safety briefing about face masks for the gas and the do's and don'ts. Us tourists wear yellow hats and the guides have orange. One guide in front doing the info talks and one carrying up the rear keeping stragglers in check and moving along together. 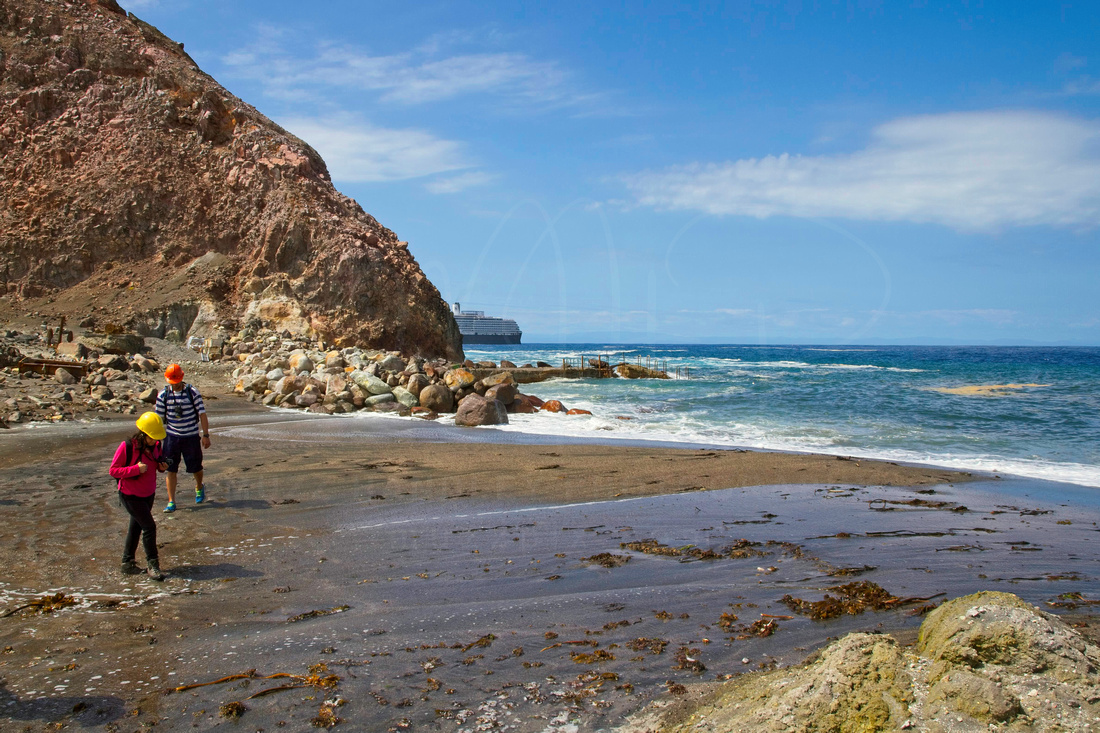 The beach at White Island.Leading up from the beach where we landed looking back with a cruise ship just appearing behind the point in the background.

Looking back to where we landed with the rudimentary jetty and a cruise ship in the distance which was doing a curcuit of the island on its travels. 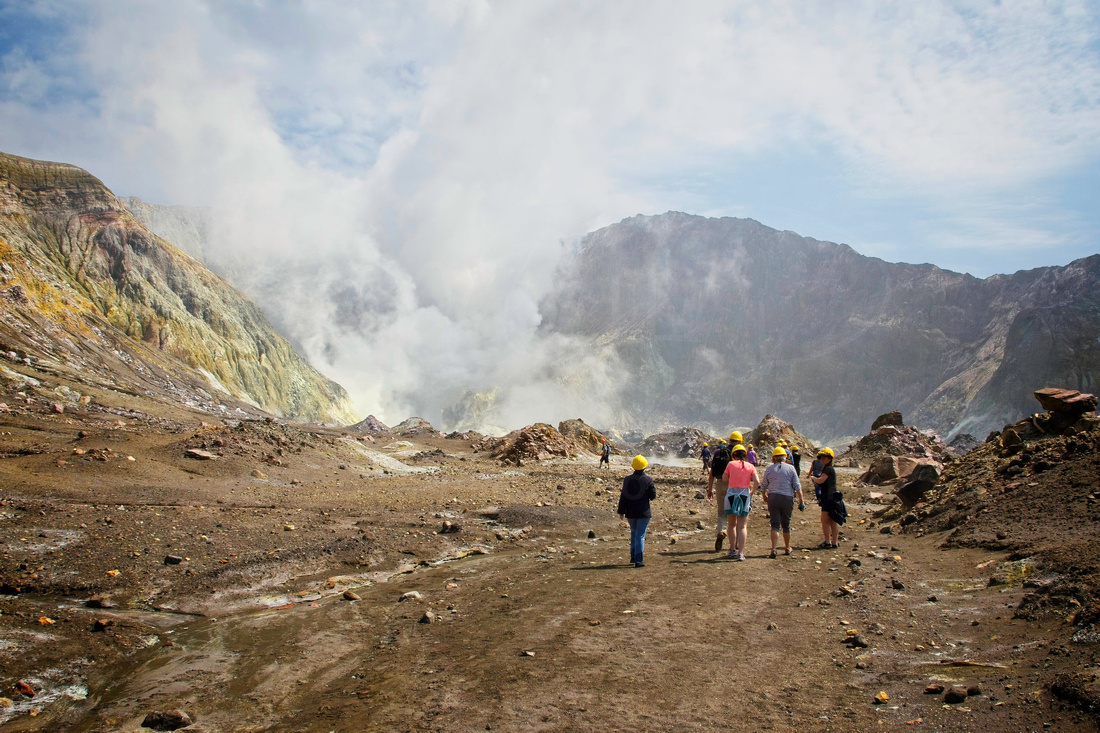 The start of the walk at White Island.This is what you would see when you started your tour up towards the volcano crater. Lucky the steam was blowing away at this time.

On the way up from the last shot looking ahead to the crater in the far distance. 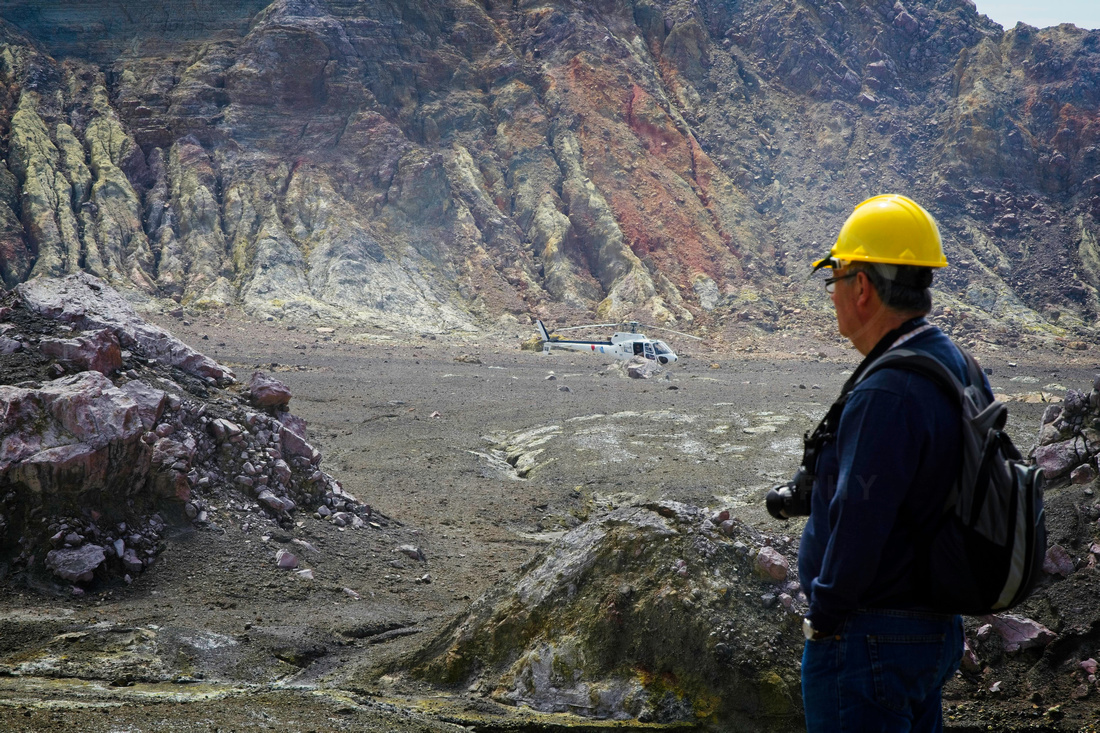 Helicopter landing area at White Island.Looking across at a helicopter parked in the landing area which had transported scientists to the island for research purposes.

A helicopter was parked whilst we were there which had brought some scientists to the island to check the monitoring equipment and do some visual surveys. 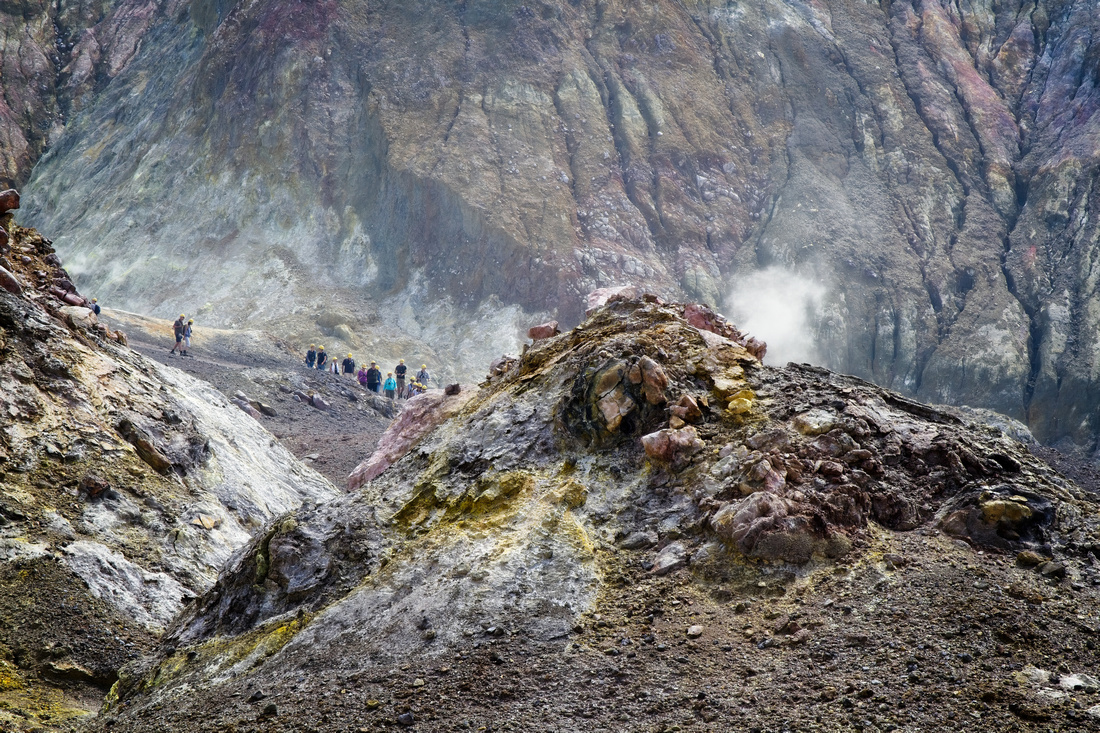 A tour group on White Island.Another tour group in front of us who were defending from the crater.

There was another tour group which came on the other boat which were in front of us and were also kept moving and separated from us. 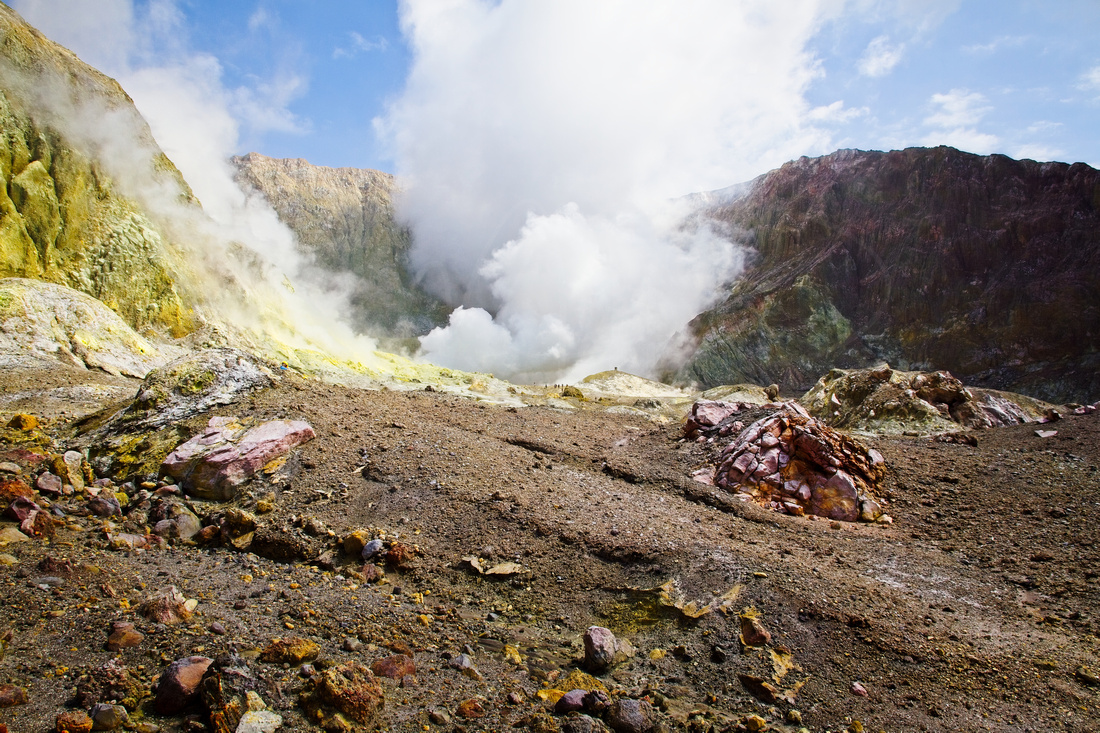 A view looking ahead to the crater which we were getting ever closer too. You can see some sulphur deposits appearing now.If you look closely just in front of the steaming crater you will see the figures of the preceding tour group standing there who look like tiny ants in comparison. 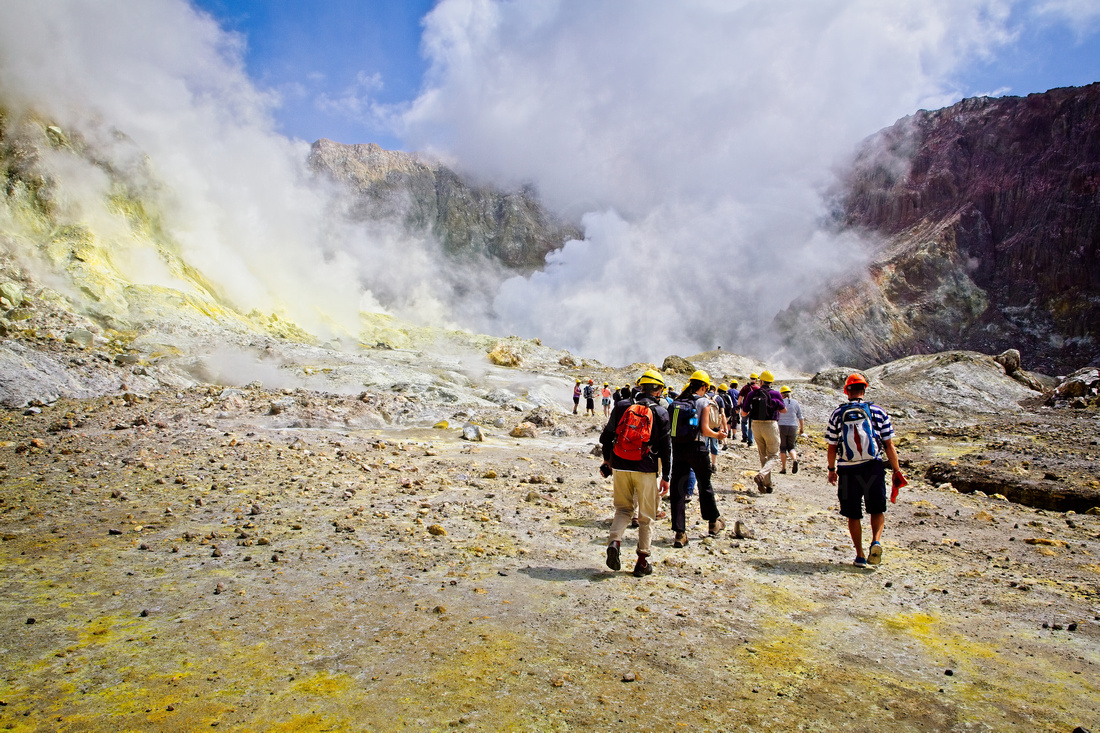 Tour on White Island.The group making their way towards the sulphur femoral.

The group approaching the sulphur deposits. Notice the guide doing the rear guard action and the sulphur on the ground. You can imagine what this was starting to smell off... 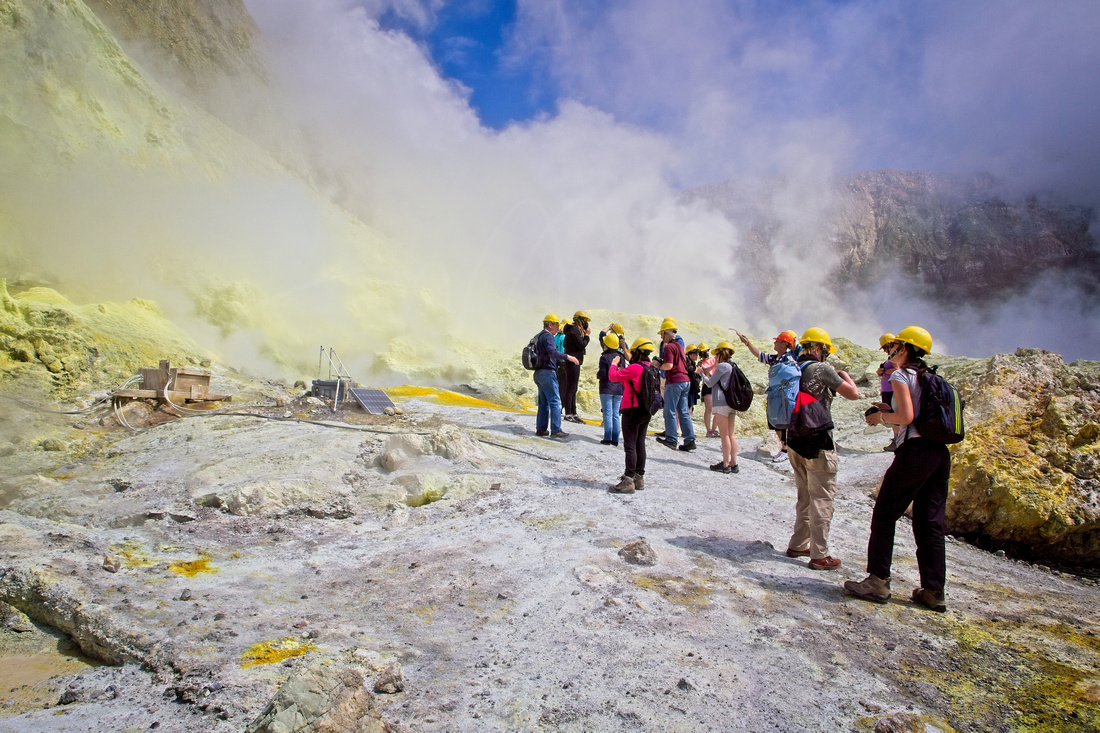 One of the remote monitoring stations that were scattered around the island. 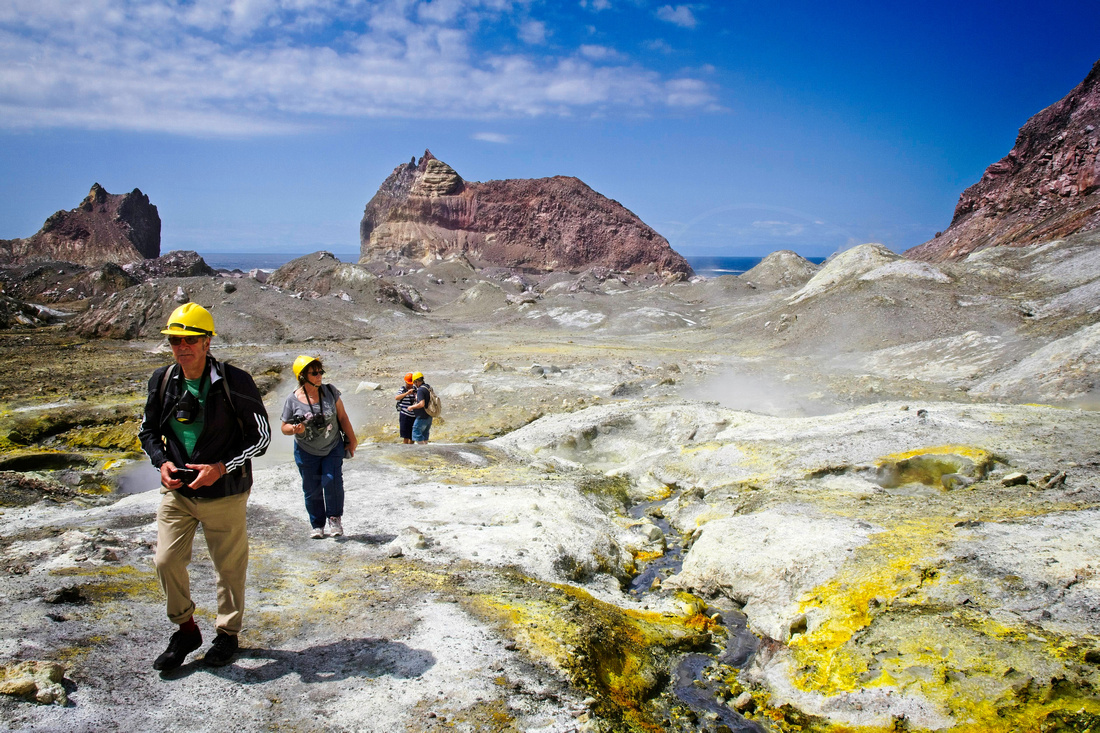 On the trail at White Island.Looking back at where we had come from on the way to the crater with a small stream and sulphur deposits.

Looking back at where we had climbed up with the small stream formations which must have a small stream running down if its really raining. Its a really diverse landscape. 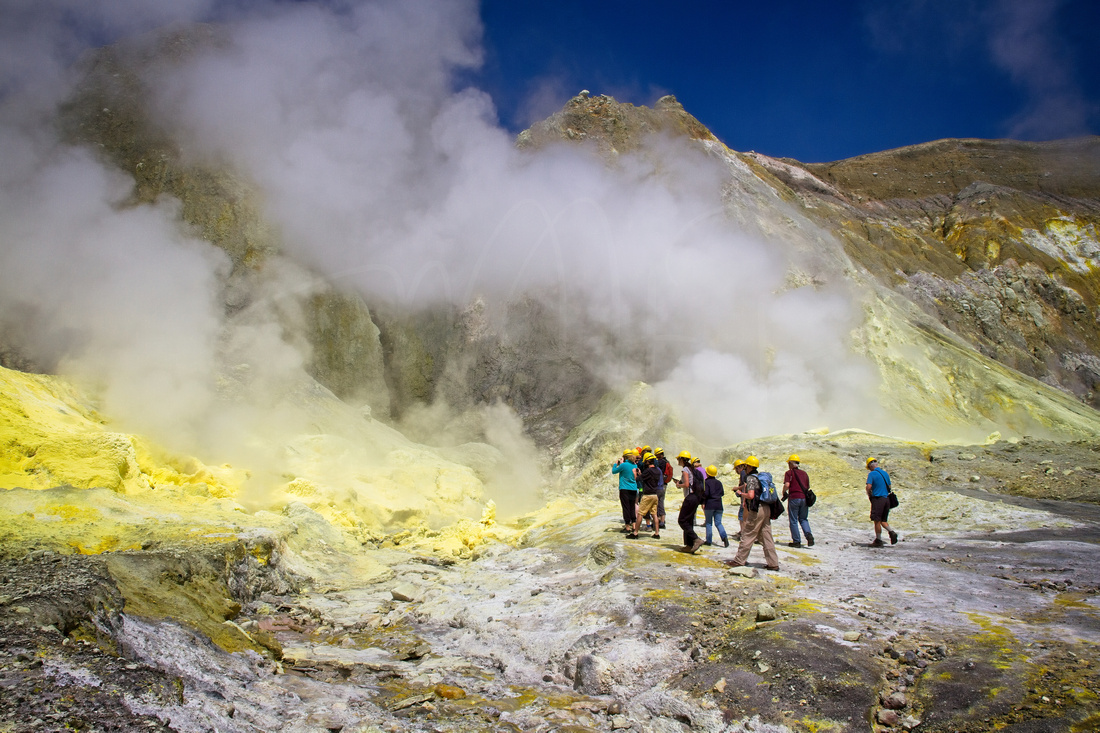 Sulphur deposits on White Island.The tour group approaching a large sulphur deposit with steam from the crater rising in the background. 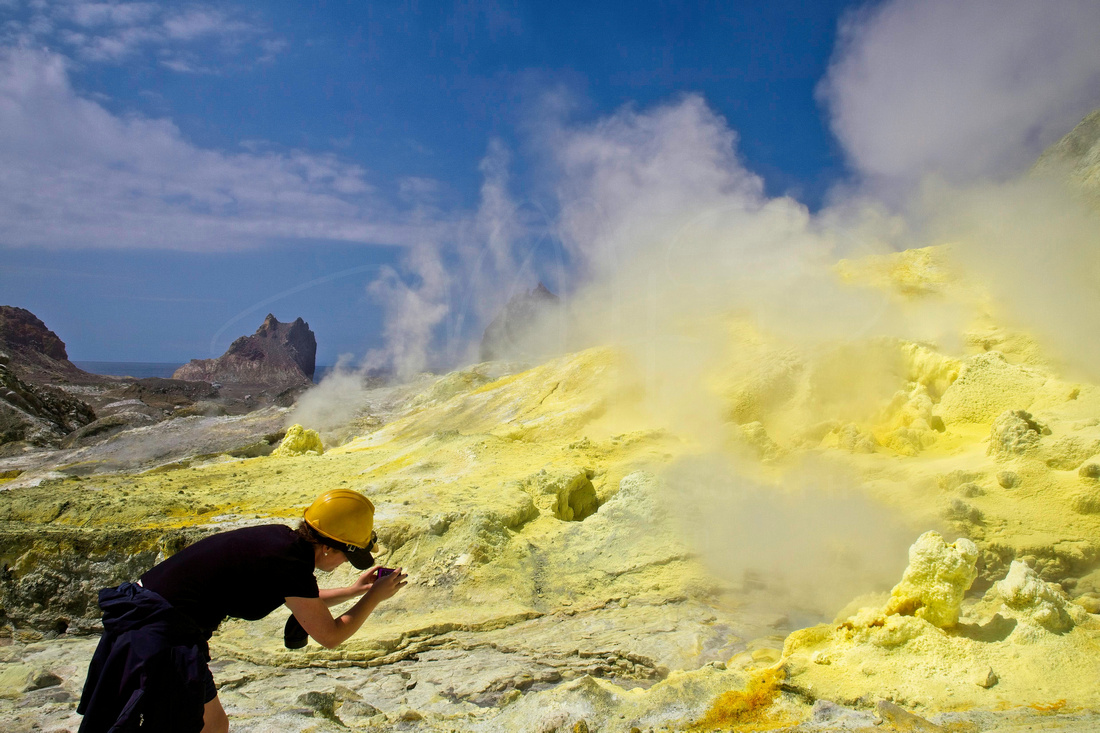 A close up shot was had but don't get too close. 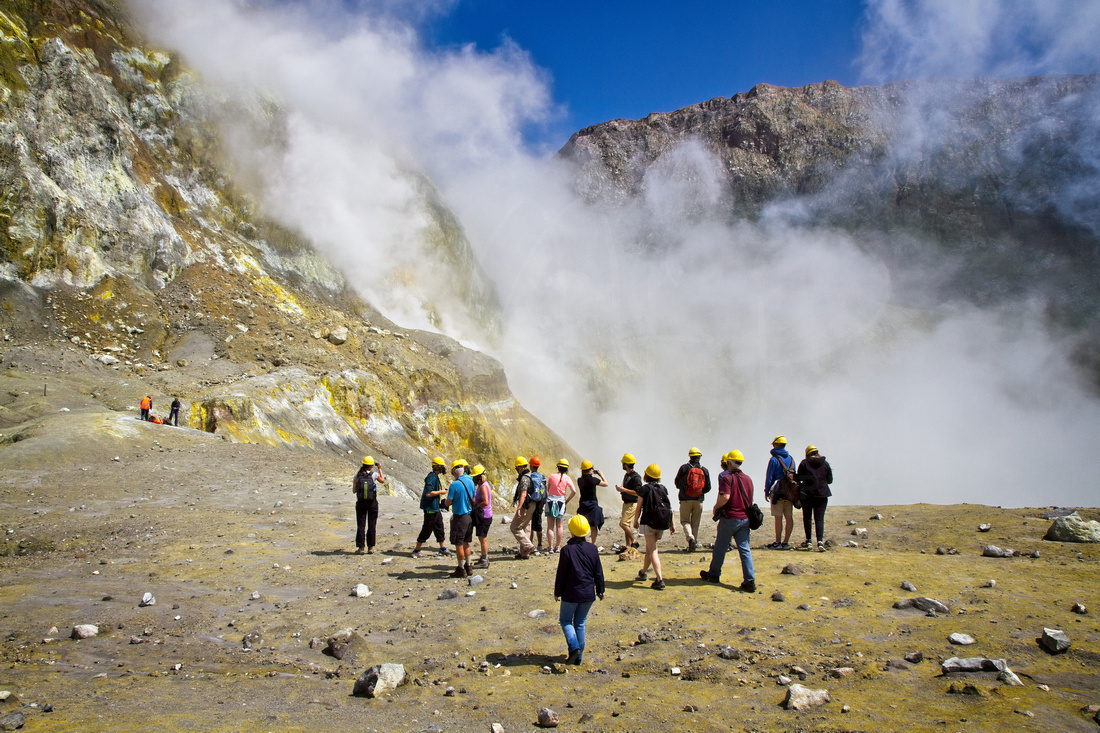 Tour group at White Island crater.The group approaching the crater at White Island with steam rising and a scientific monitoring party observing the volcano in the background.

Getting close to the crater edge. Note the crew doing the monitoring at middle left who came on the helicopter. Crater lake at White Island.The lake in the crater which you can see by the bright green colour that it is something you really do not touch or get near too being sulphuric acid.

Looking down into the crater itself. Just look at the colour of that water if you can call it that with the steam rising from the bank on the right. 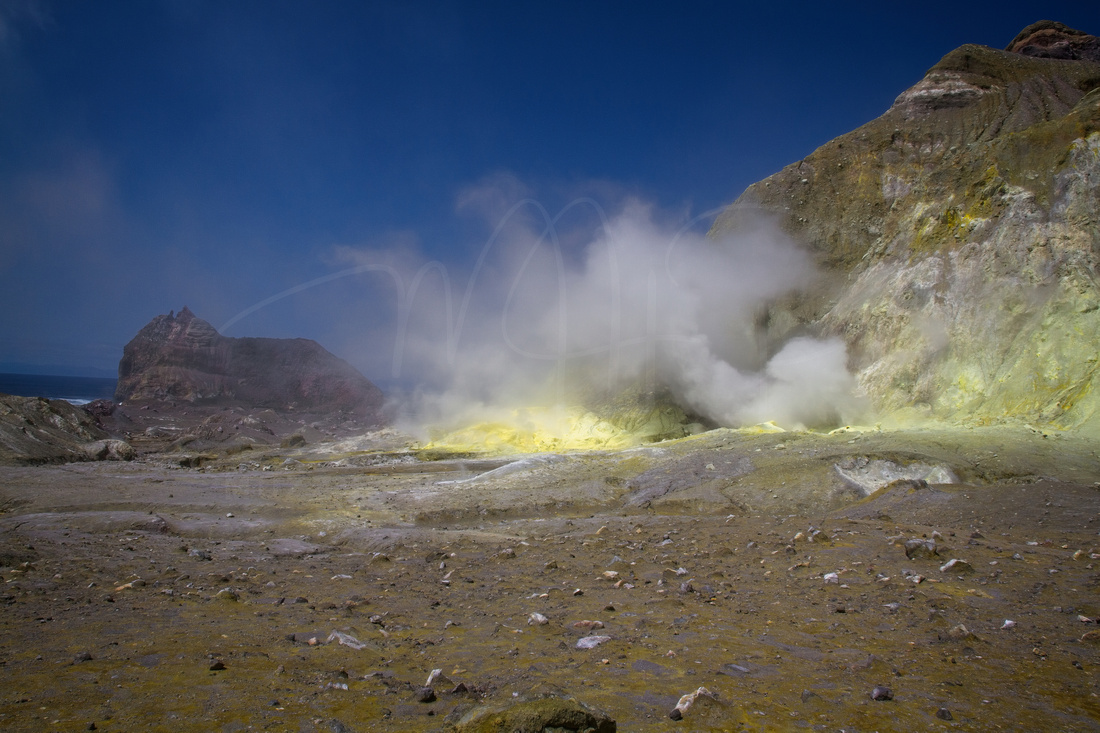 A view looking back at a sulphur deposit with steaming vents. 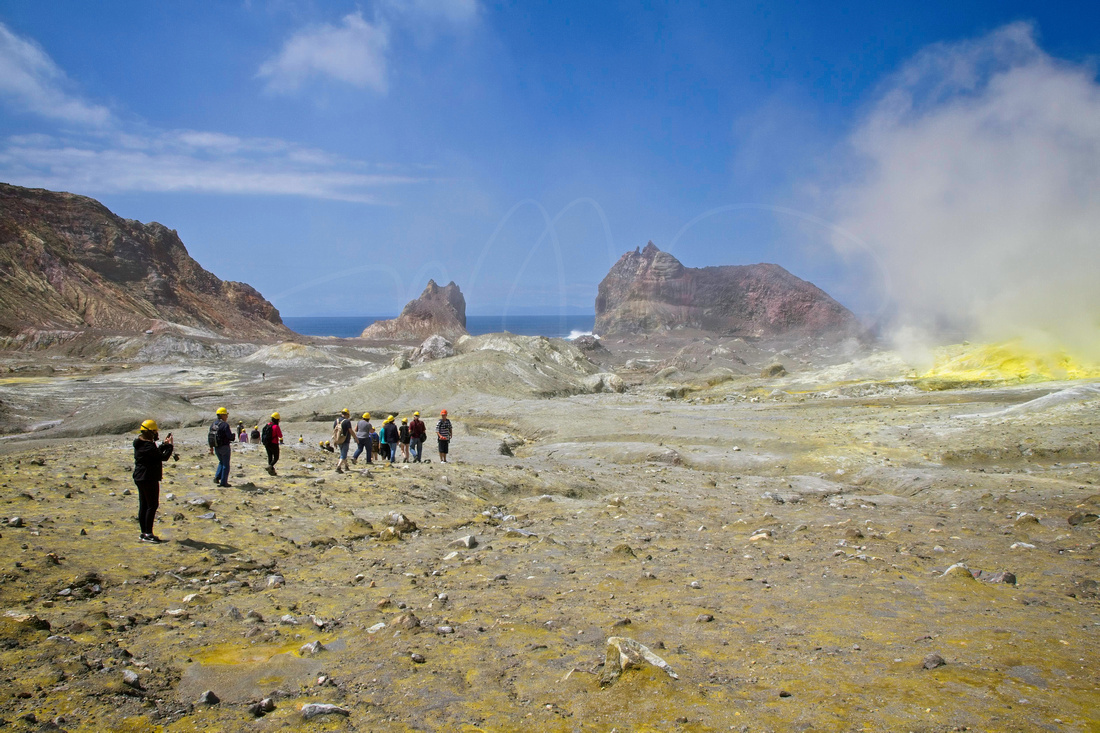 View from crater at White Island.Looking back from the crater back down to where we had tramped from with a sulphur deposit part way down.

The wander back down on another trail seperate from the one we came up. Another sulphur deposit on the right. 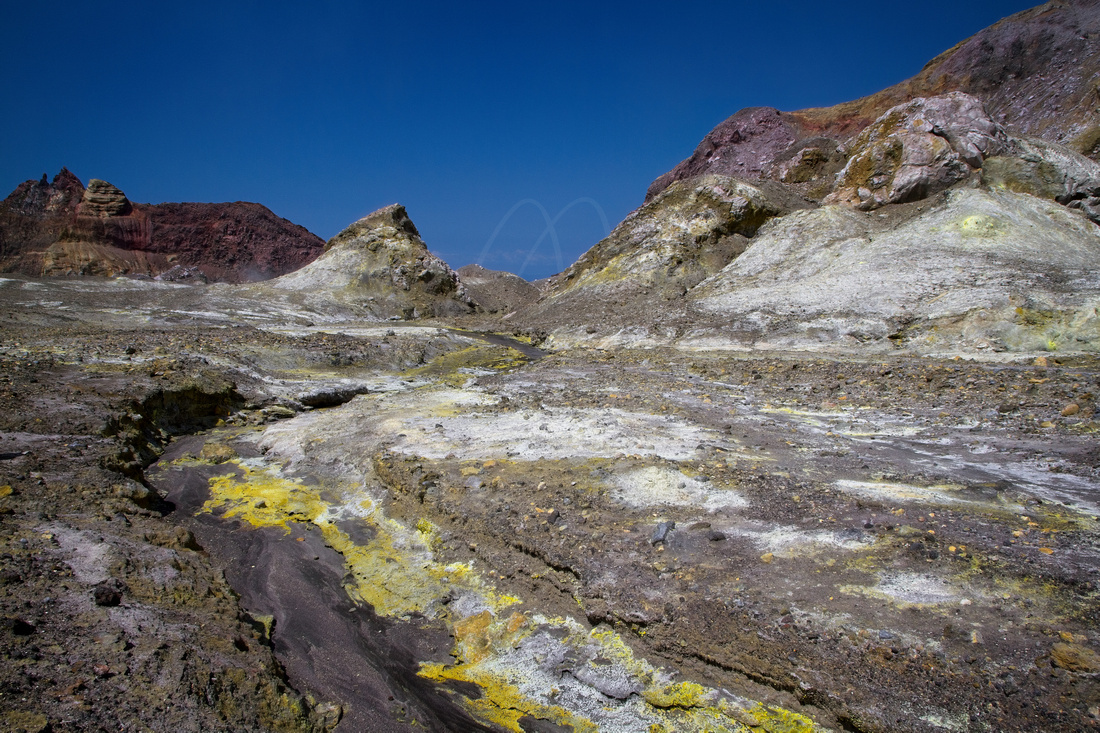 Stream on White Island.A water course which carries rainfall with traces of sulphur at the bottom amongst the volcanic terrain.

A stream wash with sulphur deposits tracking all along it. It must really poor down here when its raining. A totally different landscape...almost a moon scape. 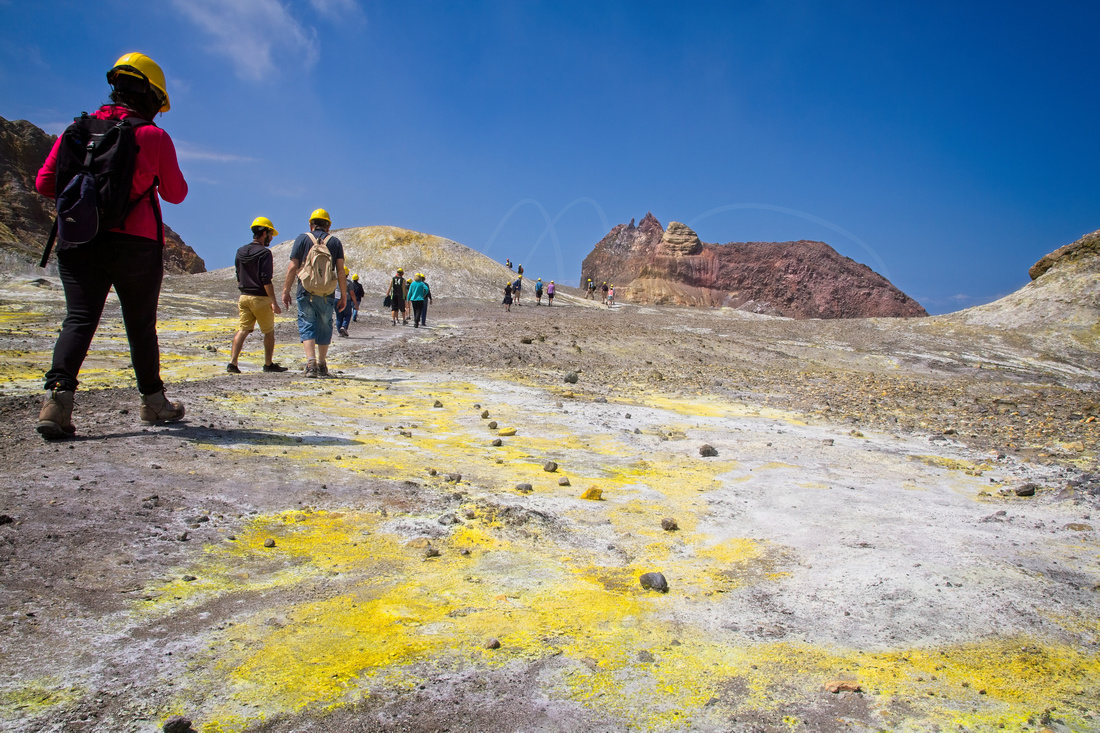 Tour group walking on White Island.The tour members making their way down the track back towards the landing area with sulphur deposits on the ground around them.

The tour group making their way down back towards the landing area. There is sulphur just everywhere... 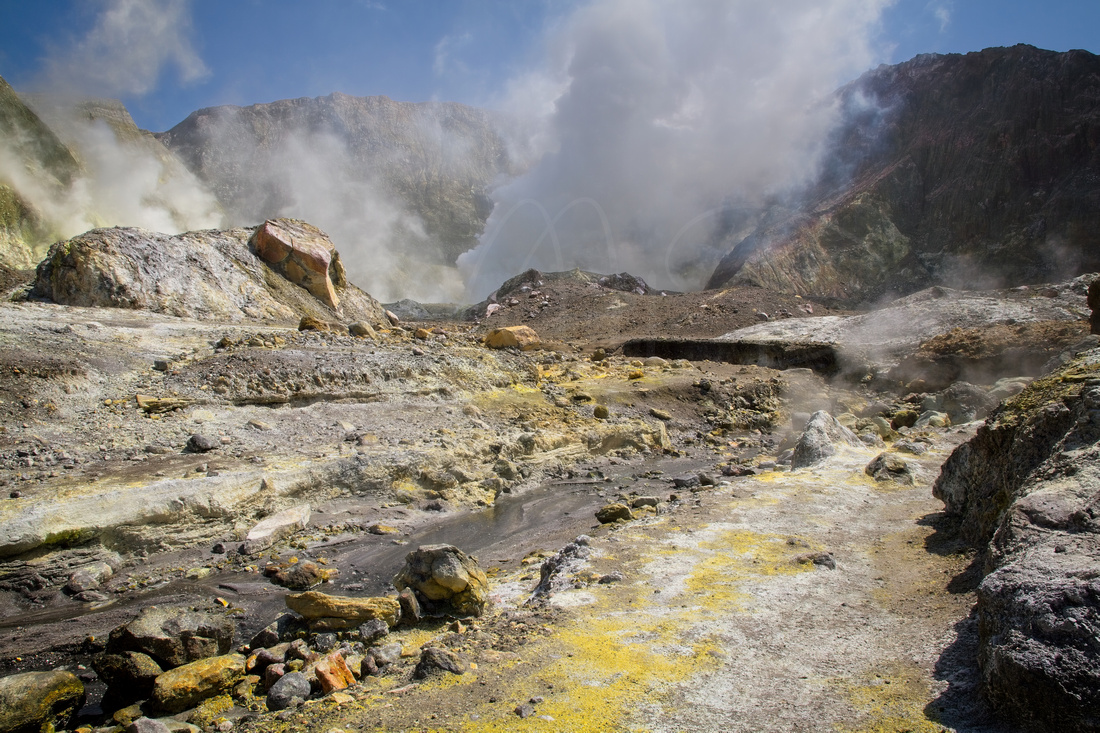 The view towards the White Island crater.Looking back up towards the crater with a water course leading the way with sulphur deposits left over from the last rainfall.

A look back up towards the crater with one of the dry wash beds. Steam was coming out of vents here too. 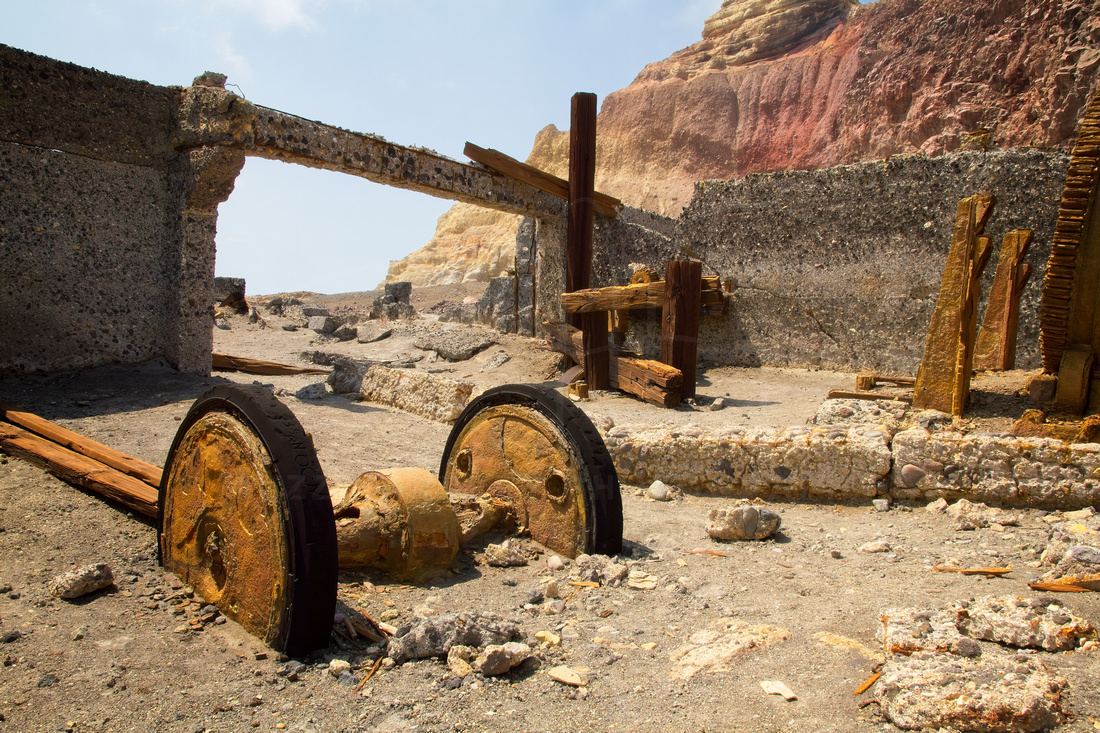 Part of the old desolate machinery from sulphur mining days. Note the solid rubber tyres and old differential with the crumbling concrete walls. 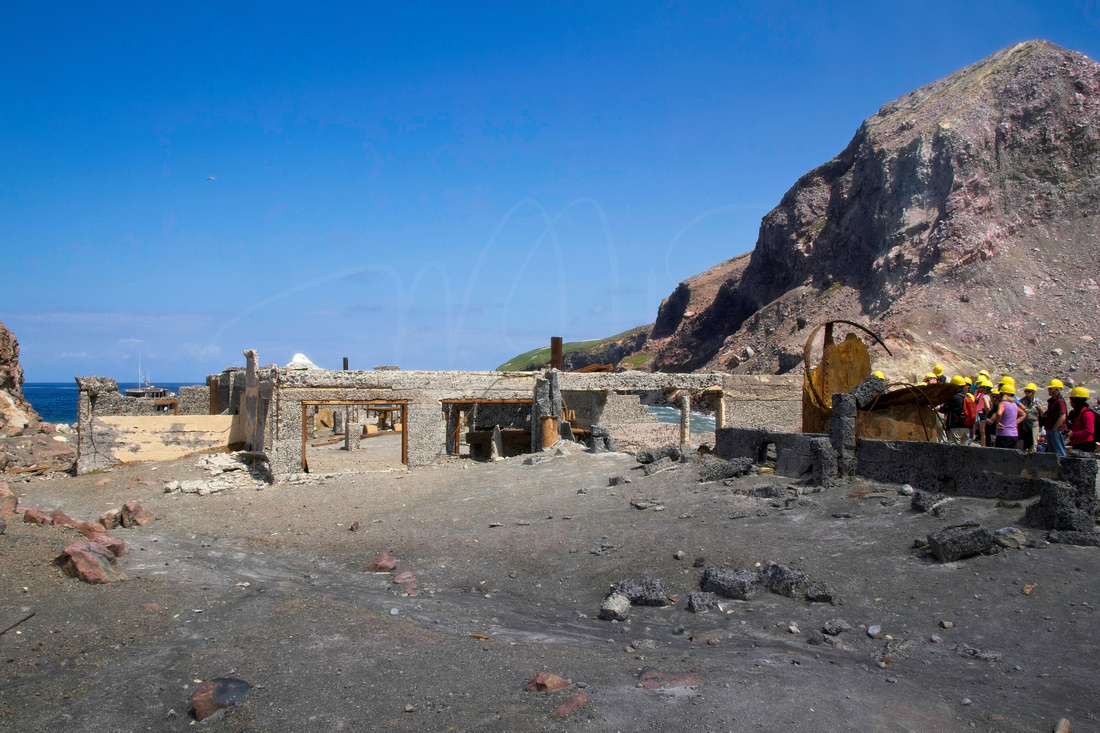 Derelict sulphur mine buildings.The remains of the old sulphur mining site after many years left to withstand the natural elements.

Part of the old buildings which showing their time spent in this environment. 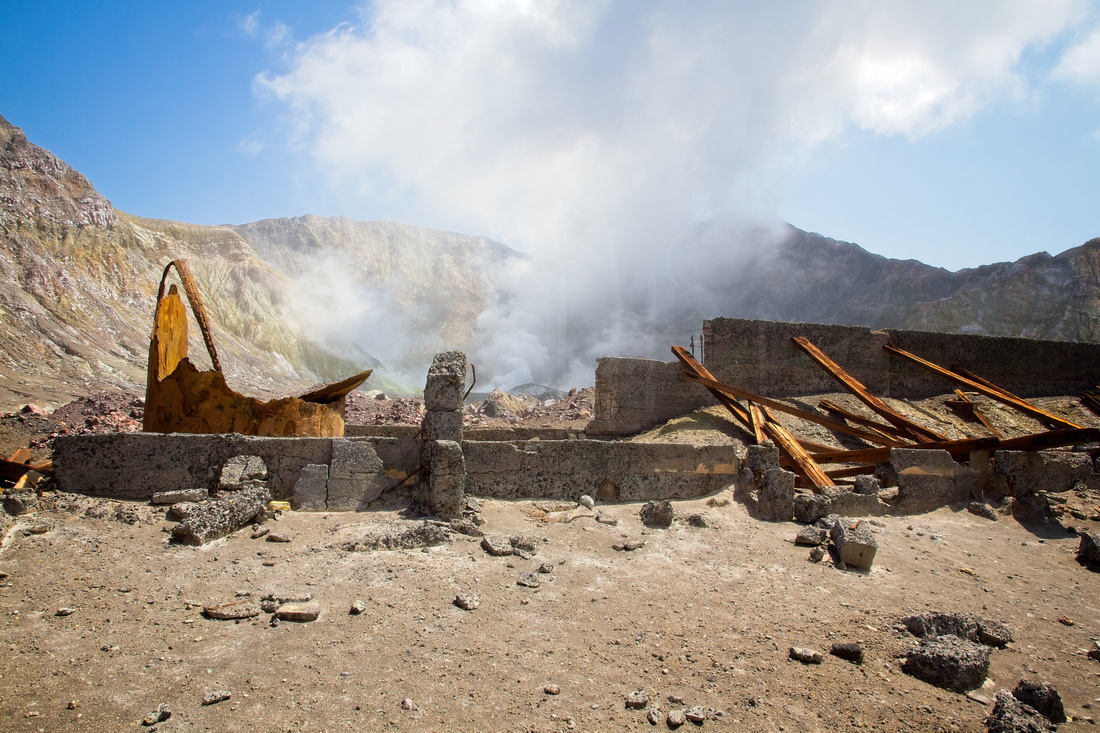 Old mine buildings at White Island.The remains of the sulphur mining factory on White Island with the crater in the distant background.

Looking over the building remains back towards the crater. 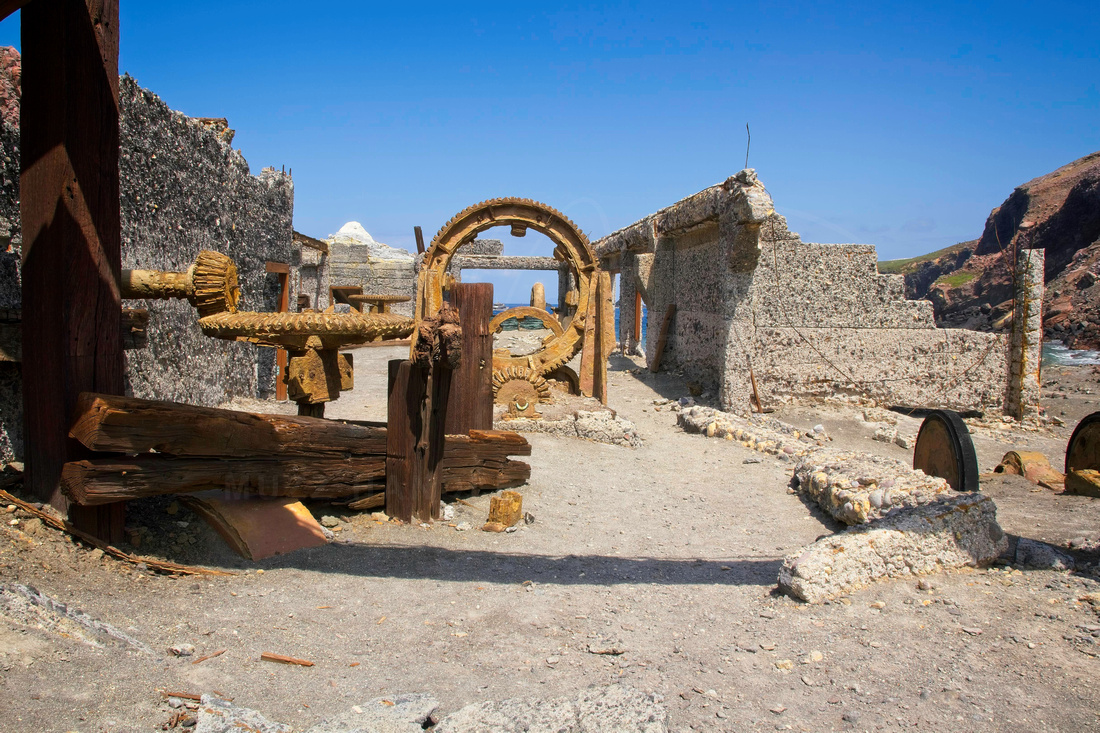 Derelict machinery at sulphur factory, White Island.Remains of the plant for processing the sulphur that was mined at White Island with major rust and corroding walls of the buildings.

Various bits of cogs and wheels in a solid state of repair. Such a corrosive environment. 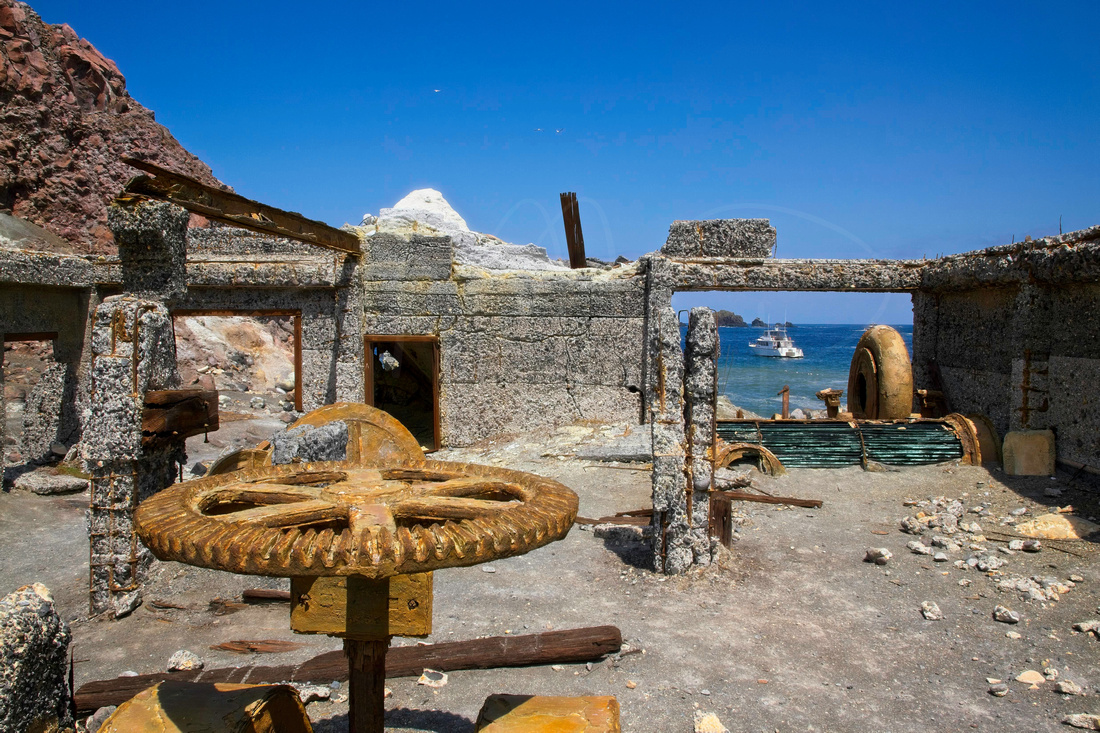 Rusting factory equipment.The cogs and various steel plant equipment of the old sulphur mine on White Island decaying in the harsh island conditions.

The final part of the tour before lining up for our turn to get on a rubber ducky back to the launch.

For any enquiries about using any images please do use the contact form. Images with people cannot be used. There is a hidden watermark on all images.

Muzz Handley Photography
Methinks no body is going back. The buildings probably would have been either destroyed or covered in ash maybe...?
Jude(non-registered)
Great collection of photos….wonder what it looks like now…
No comments posted.
Loading...
A constantly renewed journal from travels and special interest subjects that need to be shared. If there is content that you deem worthy of interest please do share to your favourite media format. Would be much appreciated...
Subscribe
RSS
Recent Posts
Drag Racing at the Masterton Motorplex, December 10th 2022 The Lake Wanaka area. The MacKenzie. Arthurs Pass and Highway 73. The West Coast Images and ideas from a South Island roadie - Top of the South. A journey to White Island... The Cape Palliser coast. A visual diary of a log truck driver's day... The Tongaporutu Boulders and coastline.
Keywords
New Zealand Road trip Photography road trip Photography Wairarapa Aorangi/Mount Cook South Island 2022 Drag Racing Masterton
Archive
January February March April May June July August September October November December
© Muzz Handley Photography
Powered by ZENFOLIO User Agreement
Cancel
Continue