Blog No 2 - From the Nelson Lakes area to Hokitika.

From the previous blog which finished with a image from Lake Rotoiti the roadie followed the Buller Highway towards Westport. For scenic drives thru native bush you cannot beat it but for image making not so great. Just hunted for a nice shot to try and escapulate what it was like but maybe a nice misty day would have done it justice. The roads here show the effects of all the rain that the area has had over winter so the remote traffic lights were a familiar sight. 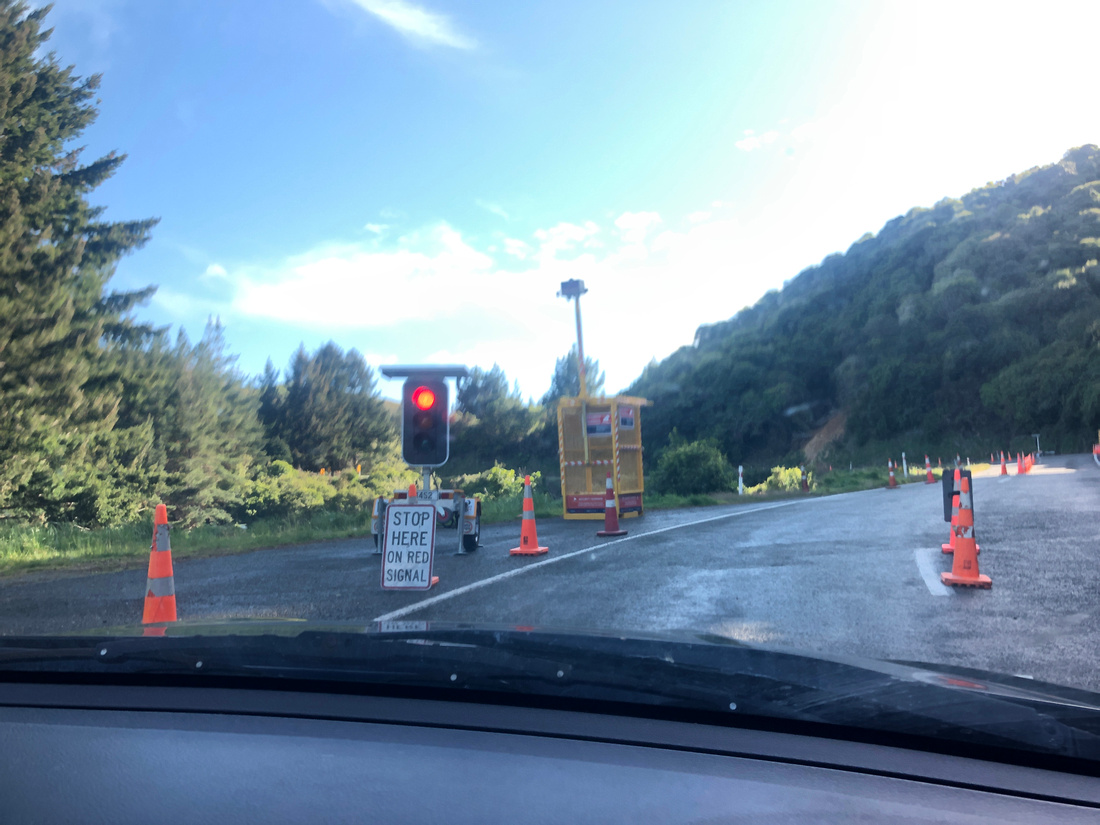 The area was a delight on the eyes if you like native forests and west coast rivers. For a photographer i just waited for something striking to jump out but apart from that just relaxed and enjoyed the cruise. It was not like the road was busy so no pressure.

Must admit my first time at Westport left me a tad uninterested but anyways had found some digs down the coast at a small settlement. Made a point of staying away from the main centres for accomodation to support the more out of the way places. Partly as it was cheaper and easier to find something on the spur of the moment. Used the 'Booking.com' app to find places to stay and used the benchmark of a small cabin at a campground which is usually about $110/nite as a comparison and more times than not a small motel offered the same rates. It was not exactly high season and methinks most moteliers were appreciative of the business. For meals the supermarket cheat was cold meats and some salads which cost wise was cheaper than most takeaways like a pizza or KFC. I carry a stash of dehydrated meals as well so can just as easily pull over and cook up a feed on the gas stove if needed. My best half did a shop at the local 'Reduced to clear' for drinks and snacks so the back of the Outback had a nice little stash as well. And its good old 'Up and go' for a quick breakfast and away.

So before the sunset went for a wander from the digs at Charleston along a local bike track. Amazing where cycle trails are nowadays. One thing that stood out was what looked like coal in the track banks. I assume it was coal as it was a coal mining area. 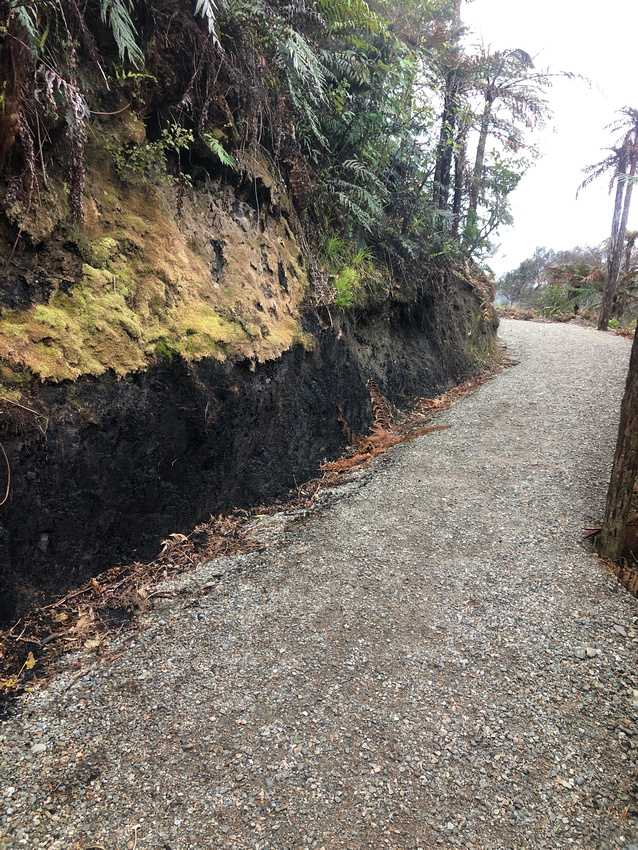 Ended up going the wrong way down this track but still a nice wander...made it to a small cove just as the sunset colours showed itself. 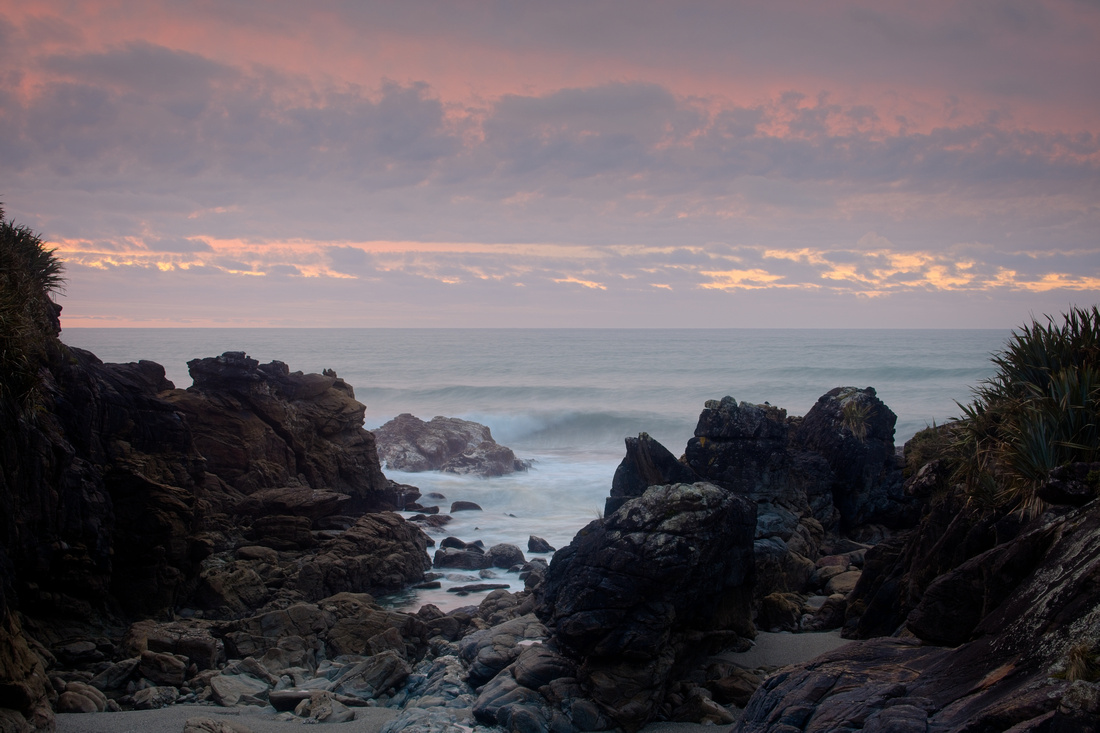 West coast sunset.Sunset colours photographed on the West Coast of the South Island at a rocky beach with swells running in with a slow shutter speed creating a soft look.

Better late than never. Also this area - Charleston - also has a tour starting from here which takes you on the old gold mining tramway with their little diesel locomotive to some old minings with glow-worms in a cave tour etc.

Driving the West Coast highway is a treat. Great vistas around every corner. To try and do it justice looked for a elevated view point. 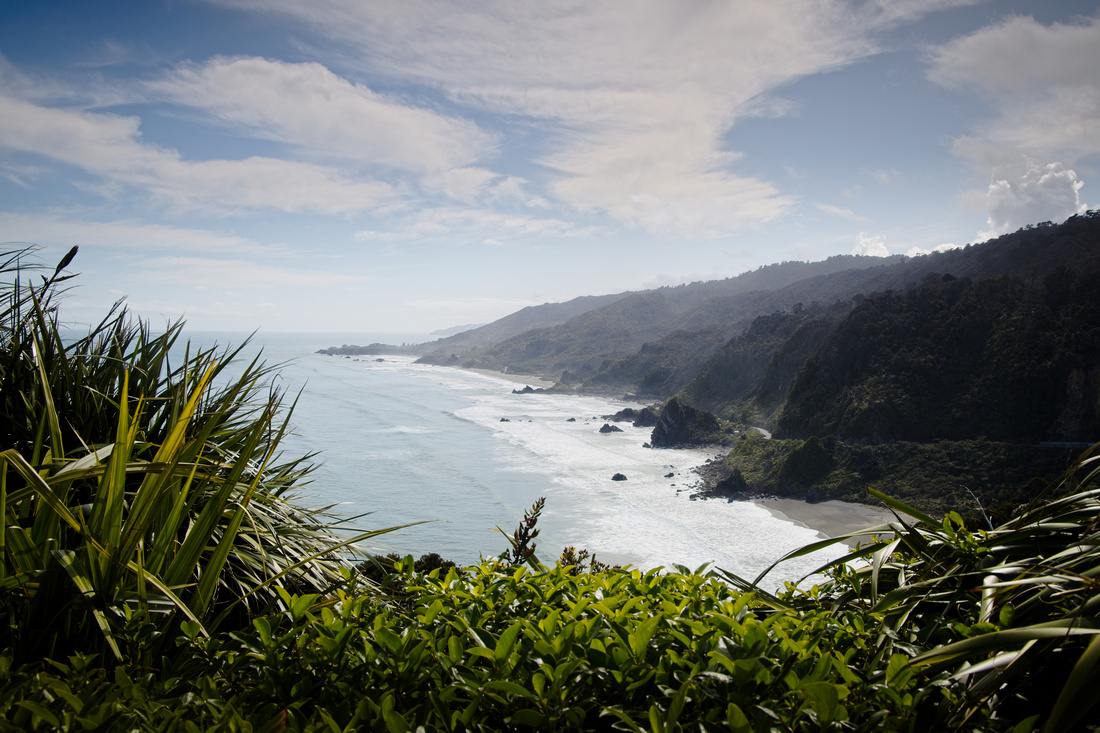 The West Coast.A elevated view looking down at the receding coastline which disappears into the distance with part of the highway showing and with the view framed with flax plants in the foreground.

The swells were creating a nice misty atmosphere which accentuated how the coast just seemed to disappear into the distance. You can catch the road on the middle right being swallowed up in the landscape.

Next stop is Punakaiki. By accident it was high tide about when i got there which is best apparently for the blow hole. Ha...that didn't work. Never mind. Here's some images anyways... 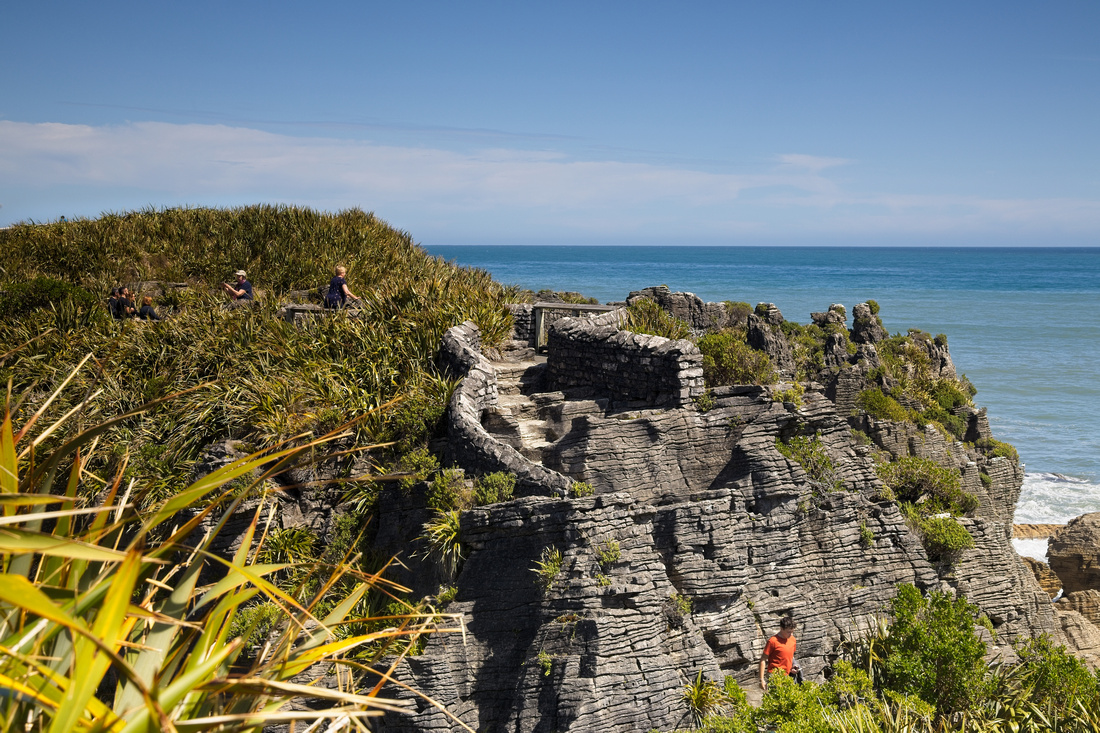 Punakaiki rocks and flax.Tourists seen walking on the formed access path admiring the distinctive pancake rock features of Punakaiki surrounded by flax plantings with a glimpse of the sea on a blue sky day. 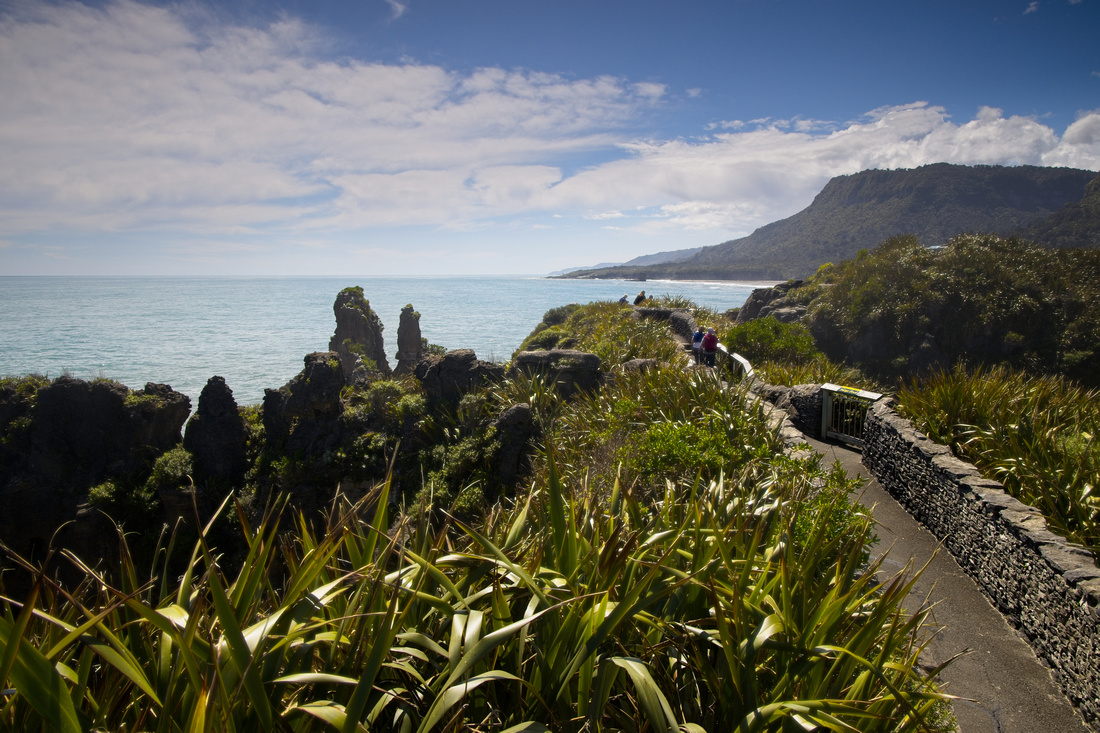 Punakaike rocks.Part of the viewing walkway at the Punakaiki Rocks on the West Coast of New Zealand showing tourists on the walkway with the rock features and flax plants against the pathway.

But did manage a nice panoramic image looking north from the walkway. Just seemed to encapsulate the area nicely.

Punakaiki panorama.A panoramic image looking from the Punakaiki walkway in a northerly direction at a cove with waves crashing on the rocks and the West Coast coastline disappearing into the distance on a blue sky day with flax plants in the foreground.

Really like this one which gathers up the boiling sea against the rock features with some of the pillars with the coastline again disappearing into the distance. The West Coast did seem to go on fore-ever.

Another from Punakaiki...amazing features. No wonder its a tourist spot.There is a handy cafe on the road at the carpark too. Always a good thing for the caffeine infusion. 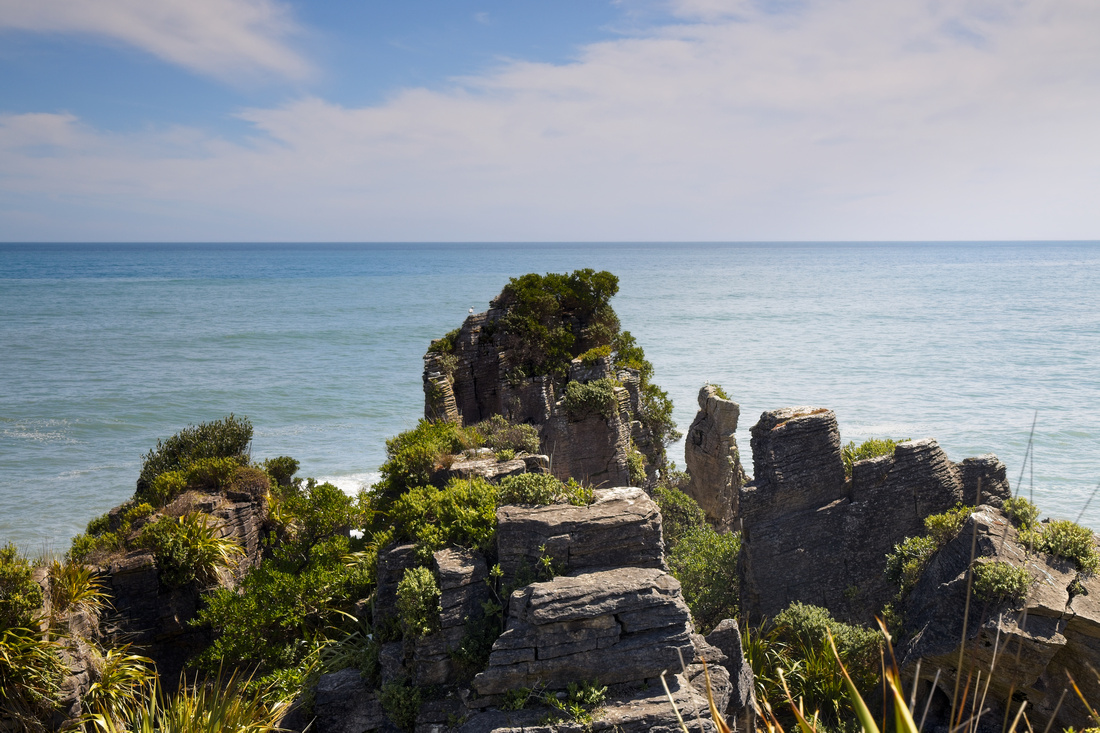 Pancake rocks at Punakaiki.Distinctive rock shapes in the foreground looking out to sea from the observation walkway at Punakaiki.

Also visited a obscure view point which gave up this image using a slow shutter technique creating a nice fwater flow effect which seems to draw the viewer into the shot. Contrast the flow of water against the in-focus rock feature which seemed to work nicely...for something a bit different. 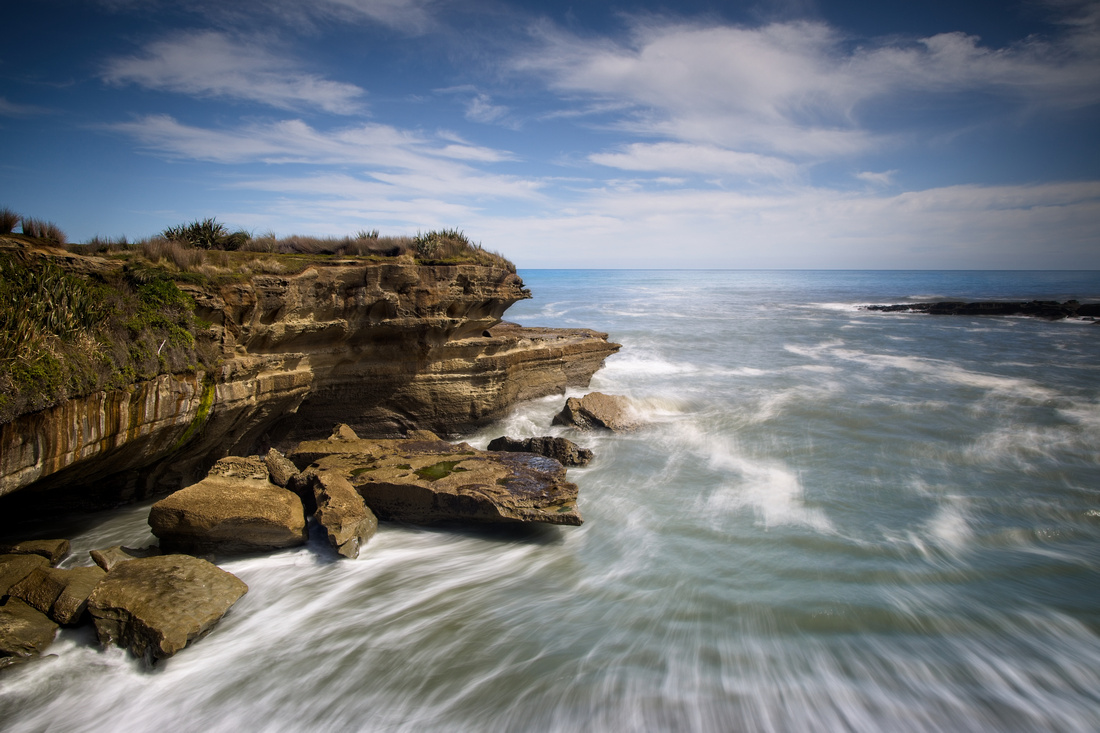 West Coast waves.A longer exposure which makes the receding wave seem streaky with the coastal cliff on the left hand side protruding into the small bay.

The West Coast highway is infamous for outstanding seascapes and for some vistas you just have to stop and throw your camera at them... not literally of course. This one the combination of roadway at top left disappearing around that headland to the wave action to those rock features in the mid bay just captured the feel heading south. 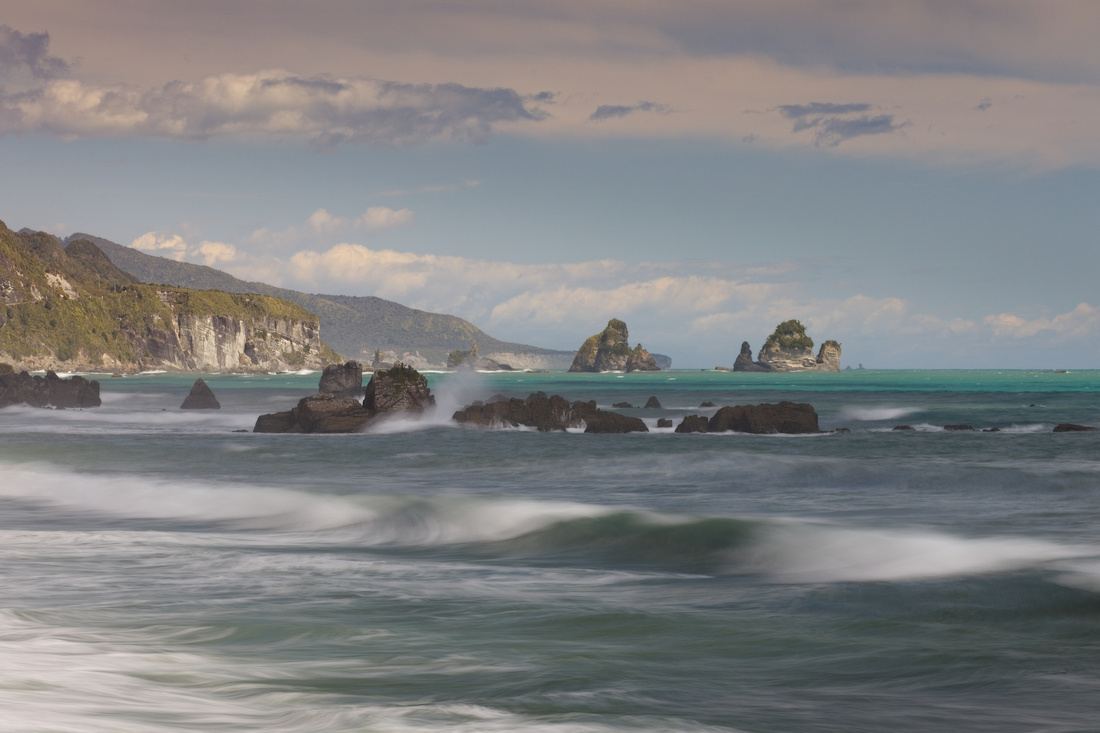 The West Coast.A view looking south down the coast at rock features in middle and far distance with rolling swells breaking using a slow shutter speed technique to soften the wave action.

For a photog it's just so much easier working out of the back of a station wagon as opposed to a car, but a mid-size camper would be nice if you wanted to spend the dollars and have the freedom to stop when and where your locations are but for now this was the more 'cost effective' option. Suppose that begs the question about the merits of either owning a camper with all the costs and advantages...such as waking up in your location of choice say for a sunrise versus paying for accomodation and being up before the sparrows to travel for your sunrise spot. Pro's and con's to both discussions. Perhaps it's just what works best for you in the moment.

This is the position that i got the previous image from using a 70-300 zoom lens . These lenses are so handy if you want to 'compress' the scene...in other words bring the background closer forward in the scene and the misty sea spray still added to the feel of depth. One thing about photographing near a busy surf is to keep the lens front clean from salt spray. And to clean your gear at the end of the day. 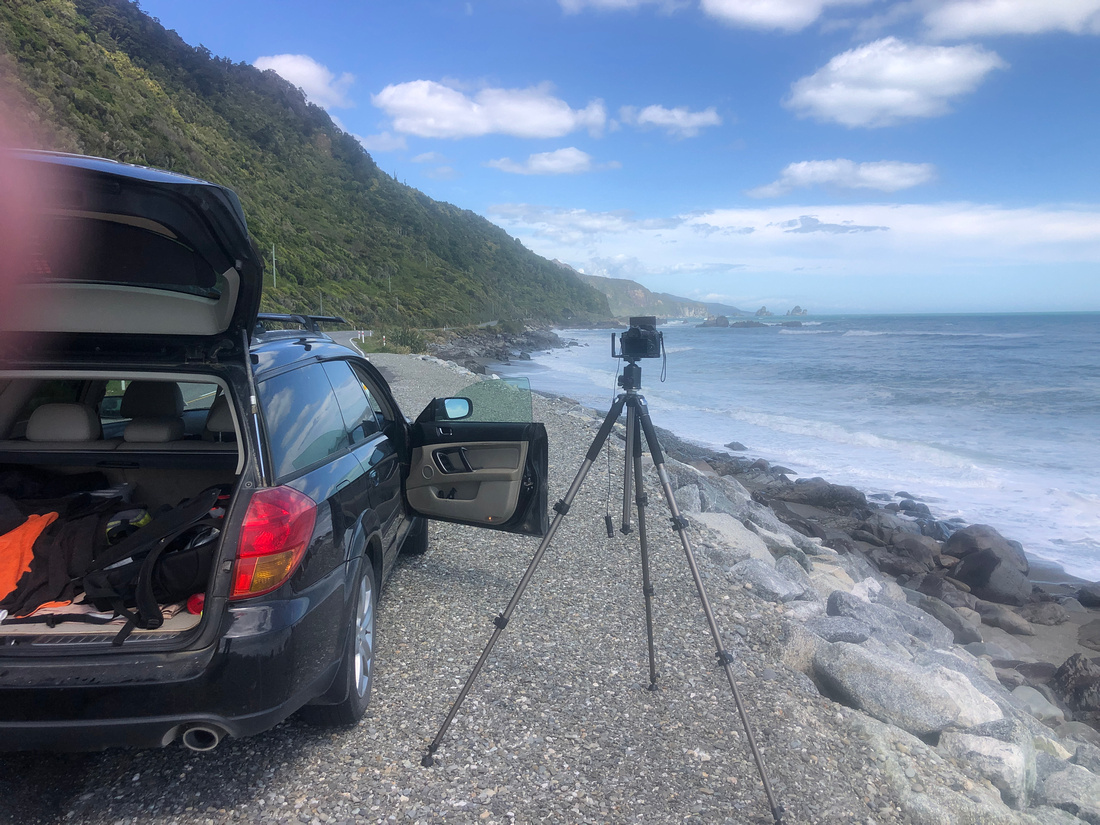 Most of these images are available as prints and we print 'in house' on Canon fine art papers then shipped to you to ready to place it in a frame of your choice. . They are available on this dedicated page...will open in a new tab.

The West coast of the South Island.

The next stop was Hokitika. Had to get a iPhone image of the famous stick sign on the foreshore. Thats a concrete chair which was placed there so you could relax and admire the outlook...as much as you can do on a concrete chair.

Next blog up will be Arthurs Pass... 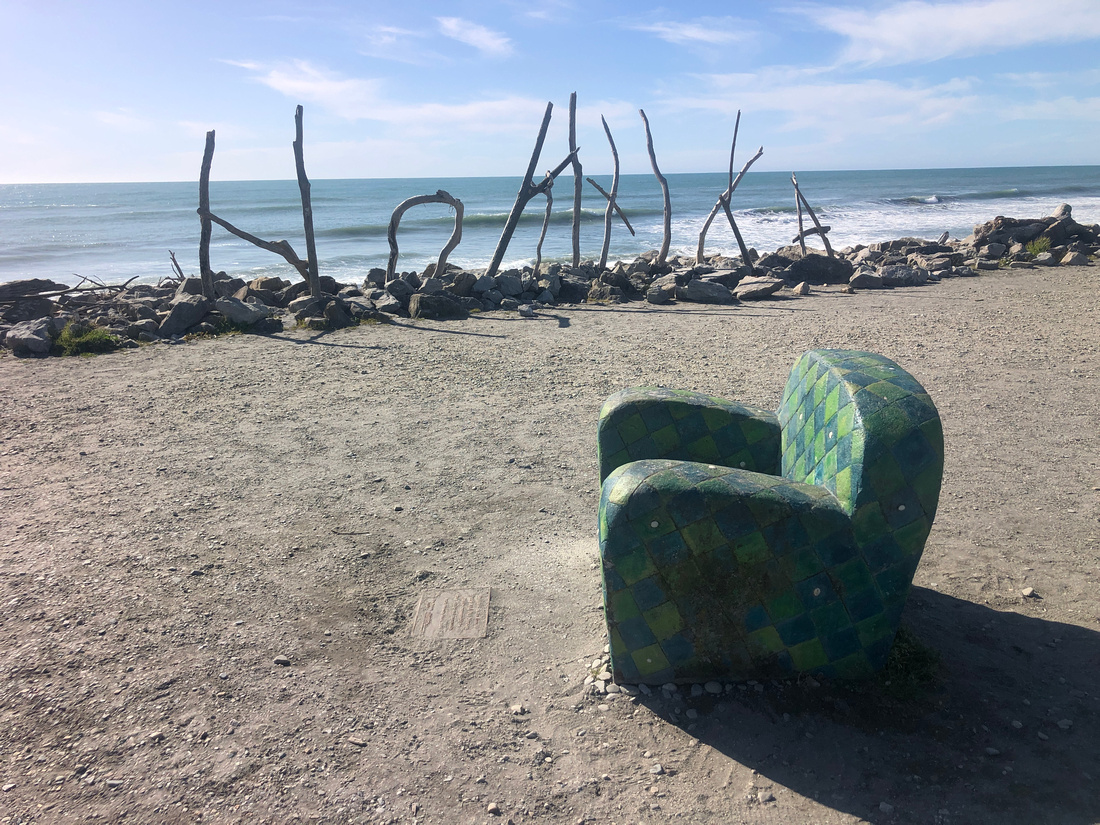