A road of visual delights and frustrations.

From the turn-off at Kumara north of Hokitika which is the start of highway 73 and the road to Arthurs Pass its a really cruisey little road wander until you are gradually weaned into a few narrow windy bits with the Taramakau River on the left and then the railway line joins the journey. It's bit like a transition from coastal flats to being enveloped into the hills. The highway eventually takes a steep windy form and you are warned about grades in such and such for trucks, a steep few corners then its a climb over the Arthurs Pass viaduct. Why on earth if they spent so much on the bridge didn't they at least work on the approach road. Who knows...

Anyways had to stop and get the tourist shot from the look-out...as you do. You must admit the scenery is a great  accompaniment. And it would not have been a easy bridge to construct. Its not flat but has a bit of a climb up it. 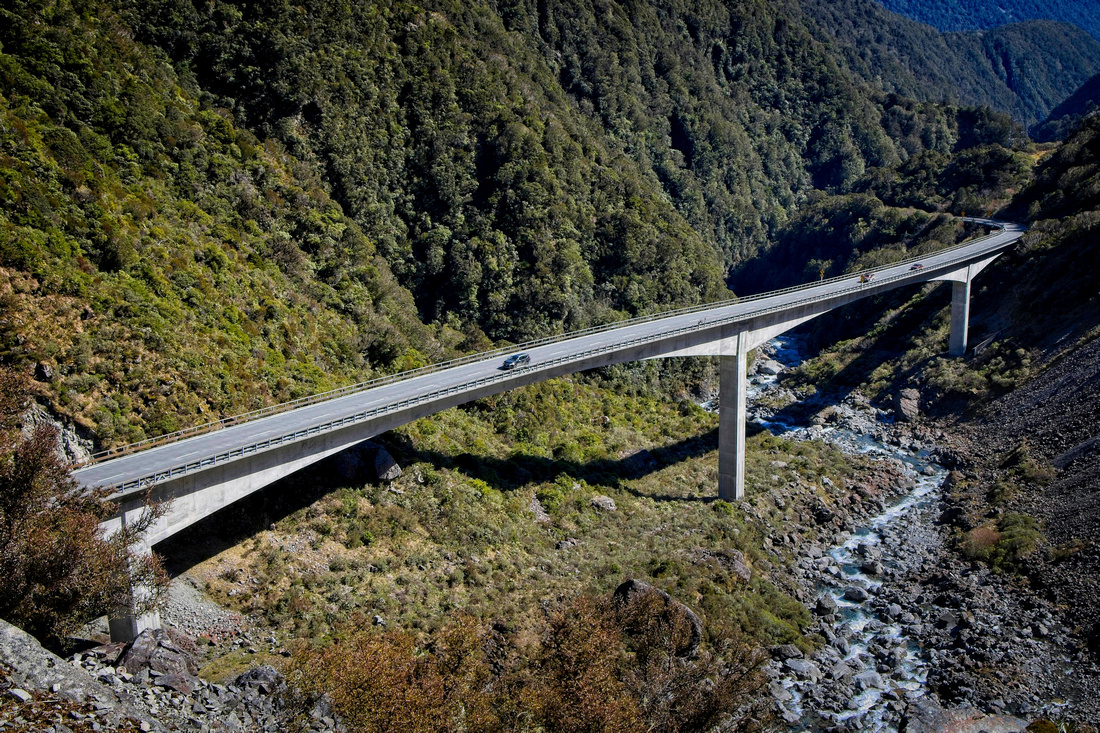 The Arthurs Pass viaduct.The classic view of the viaduct from the observation platform.

Must now add that as well as having a supply of photo spots pre-loaded on my phone on Google maps also carried with me a old road atlas that was printed in 1991 and found in a second hand store in Paeroa from memory which we paid the princely sum of $1 for it. The thing with land features etc is that they are still the same more of less as they were all those decades ago so as a reference it is still up to date...in earth terms. 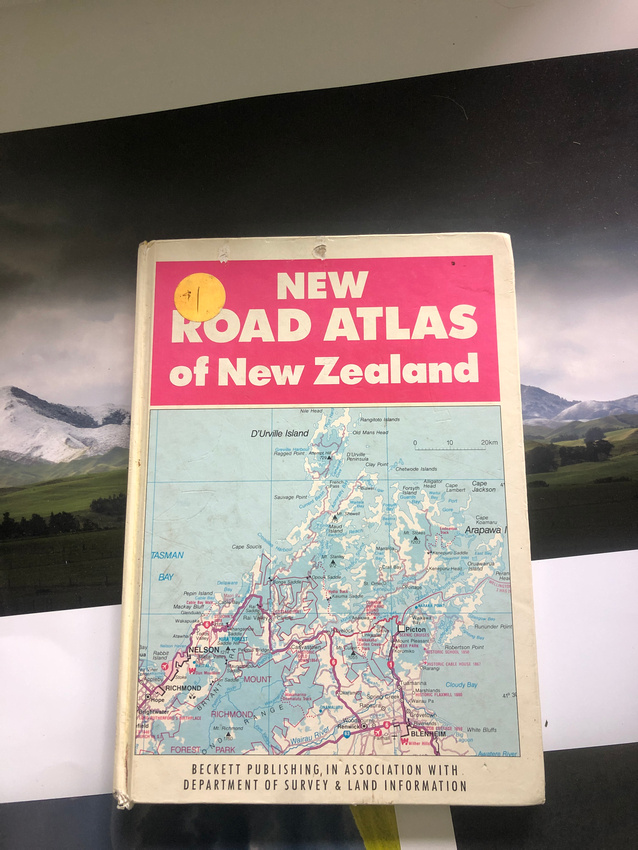 Some may say its sacrilege to be writing on it...oh well too late now. 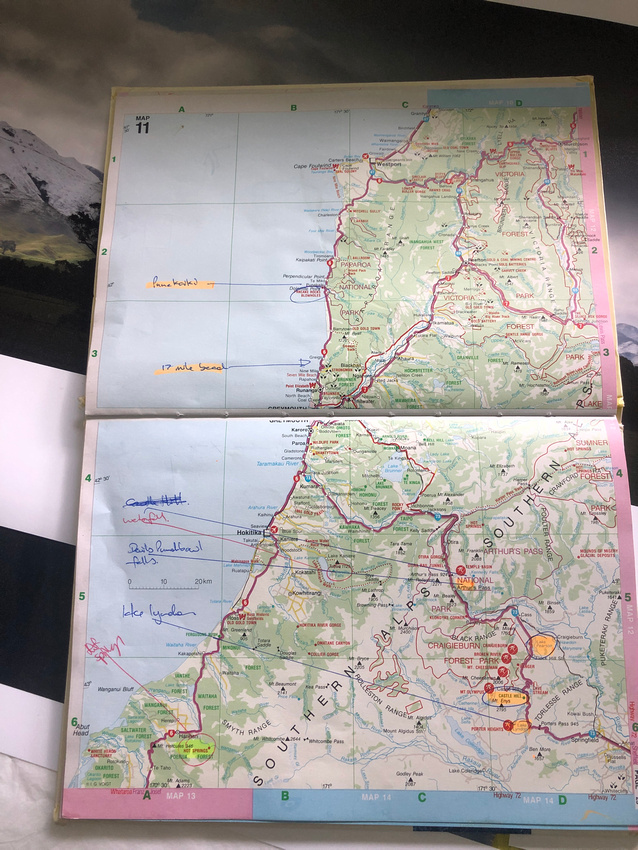 That was my reference for this part of the road trip which was not rushed but had places to see so didn't have time to wait for days for that perfect sunset anywhere except for the Hokitika one which was a fluke. I remember one of the photogs on a photo social site called Flickr saying the only chance they had to see a Kea around these parts was at the Cafe at Arthurs Pass village. He was right about that but this sighting sure was fleeting. At least can say have laid eyes on one...not with a camera yet. One day.

One point of stopping at the village, after lunch of course was the hike up to the Devils Punchbowl falls. Its a bit of a climb, think lots of DOC steps and you get the idea, but well worth the time and effort. There was a steady stream of people thru the viewing platform but eventually had a chance to try for some imagery. Did full fall shots, did what's called bracketing which is a method of taking in this case a series of exposures [ 5 in each group of the same part of the scene locked down on a tripod ]  from dark to bright exposures which are blended together on the computer to create a image that is correctly exposed for the lights and darks. Was having some fun setting that up and in the end hoped that i had covered the bases but when trying to combine everything it just didn't work at all. So to just show that we don't always get it right on the night here is the failure. But its not really a failure as you always come away with some new thing learned. In this case after beating myself up about the frustrations realised that there was just too extreme light to capture it properly. It was a cloudless day and really bright. The moral is that it is far easier and better to image these places on a cloudy day so you don't get the extremes. It's just like photographing a home garden...pick a cloudy day for the best results. Here's my image from that learning curve...will be back again to get it right someday. 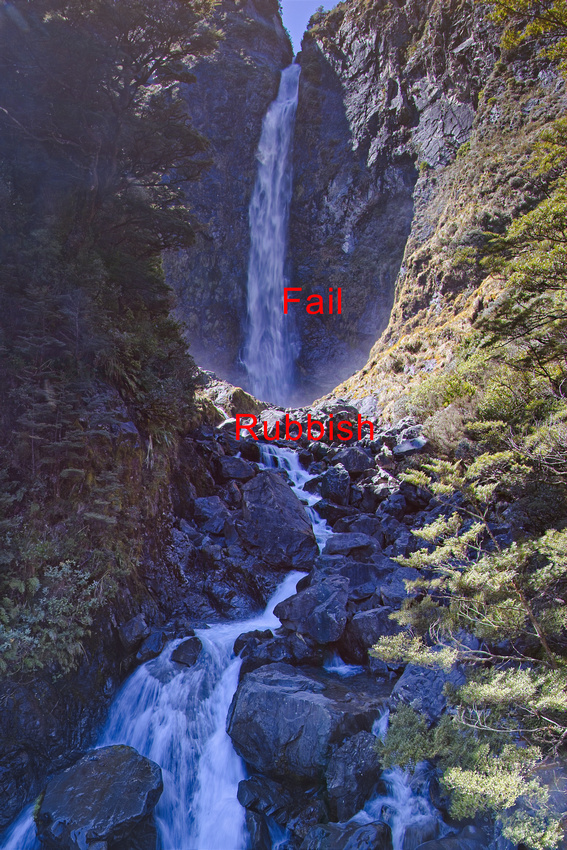 Howabout a video instead from the trusty iPhone...

Next along the highway after Arthurs Pass village is a long one lane bridge and thought that what if i could get a shot of a truck going over. Well here it is...

Single lane bridge.The single lane highway bridge at Arthurs Pass crossing the Waimakariri River with a truck and trailer unit and some passenger cars crossing the bridge with Mt Murchison in the background with snow covered peak and surrounding mountain formations.

That's the Waimakariri River. Following on from there just had to stop for this image. Probably looked like some silly tourist by now. Hopefully as wasn't driving some rental the locals did think i was Kiwi. 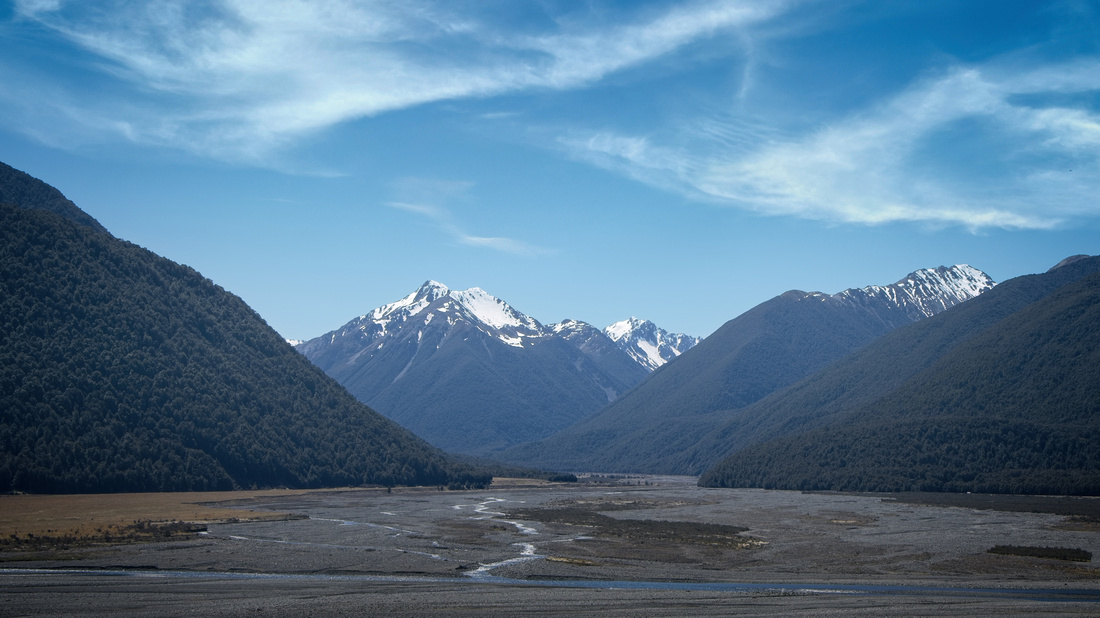 River valley at Arthurs Pass.Looking up a river valley with a small water flow to snow covered mountains in the distance framed by bush covered hills rising from the river base in a typical Southern Alps view.Mount Valiant is the mountain standing tall at the end of the valley.

I am told by a reliable source that the peak is Mount Valiant at the back left. Just seemed so typical of the landscape in this area and the stream just lead the eye into the valley nicely.

Next for this photog was Lake Pearson. The rest area/camp spot just didn't feel right so on a little bit to this view after climbing the road side bank. Was two steps up and one sliding back on this climb but was worth it. A hand held panorama stitched together.

Lake Pearson panorama.A large panorama of Lake Pearson near Arthurs Pass with two mountain sides meeting in the middle with the mountains reflected in the lake with new spring growth on willow trees in the foreground with wispy clouds above.

This next leg of the trip was a really nice cruise thru high country. Just had to stop and image this. Big wide open spaces...such a awesome drive.

Panorama of a South Island rural road.Looking down hill at a rural highway towards the distant mountains with the road disappearing between them with farmland on both sides with sheep grazing on the right hand side.

But the next stop was the aim for today. Castle Hill. So many people i talk to have never heard of it let alone been there. It was in the Lord of the Rings so is slightly world famous you know. The limestone formations are just amazing.

Castle Hill rocks.A view of the limestone formation rocks at Castle Hill with a walking track leading into the scene and disappearing past the formation. 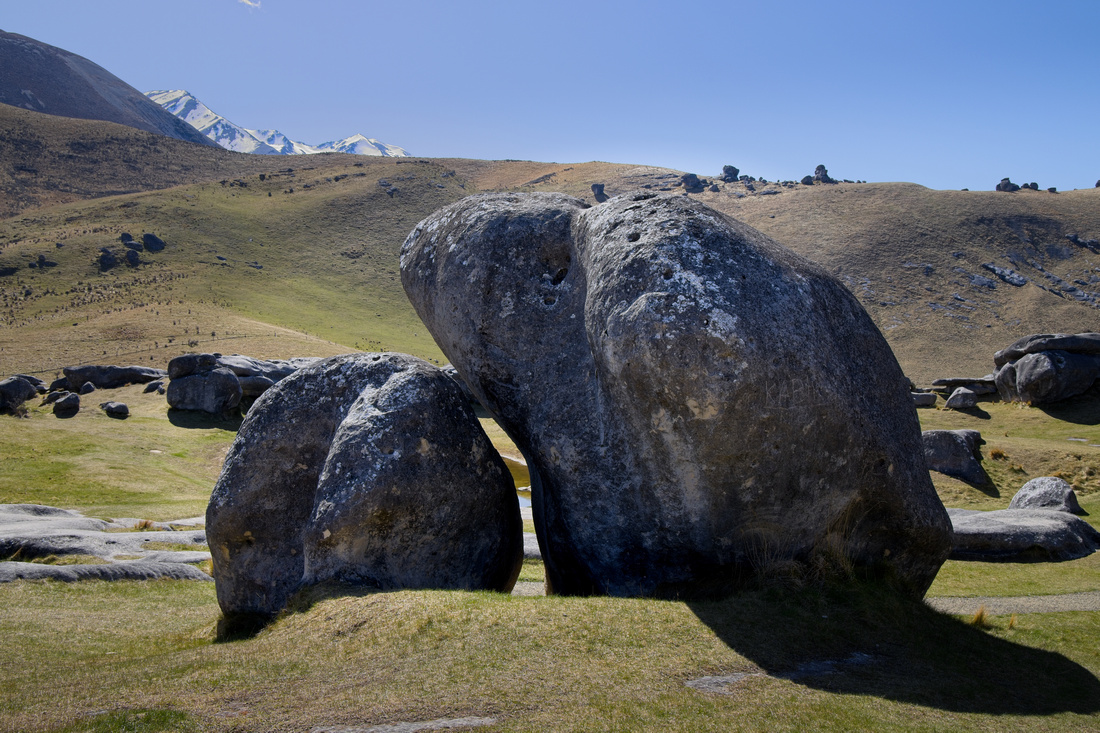 Have left the person in this image for scale. 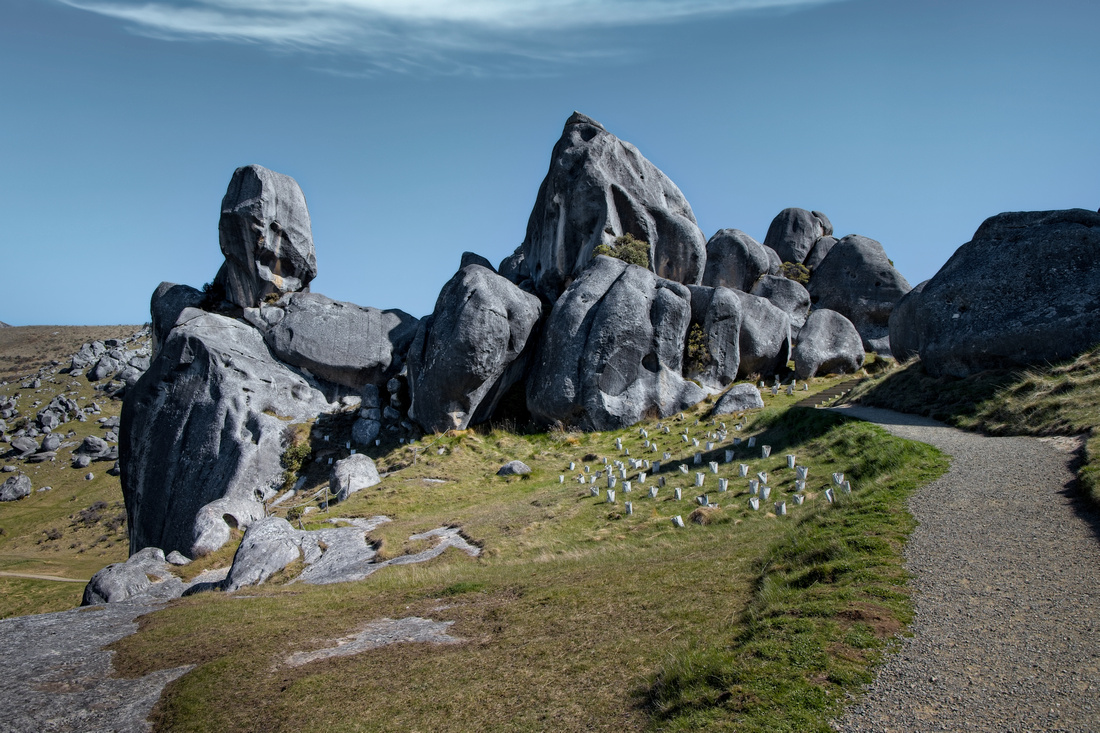 The little bags are protecting some new plantings. 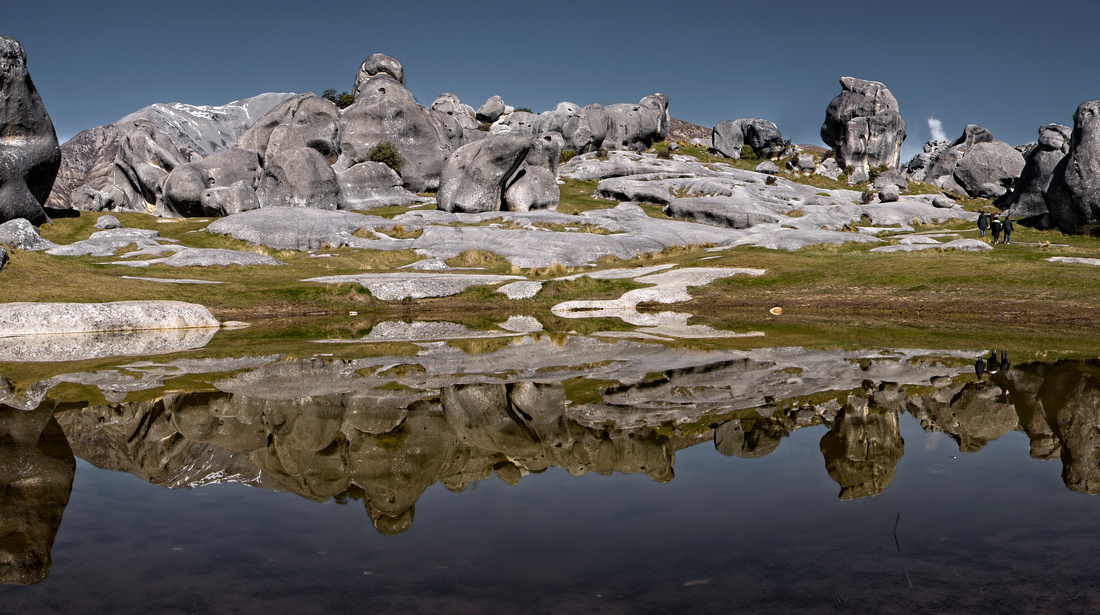 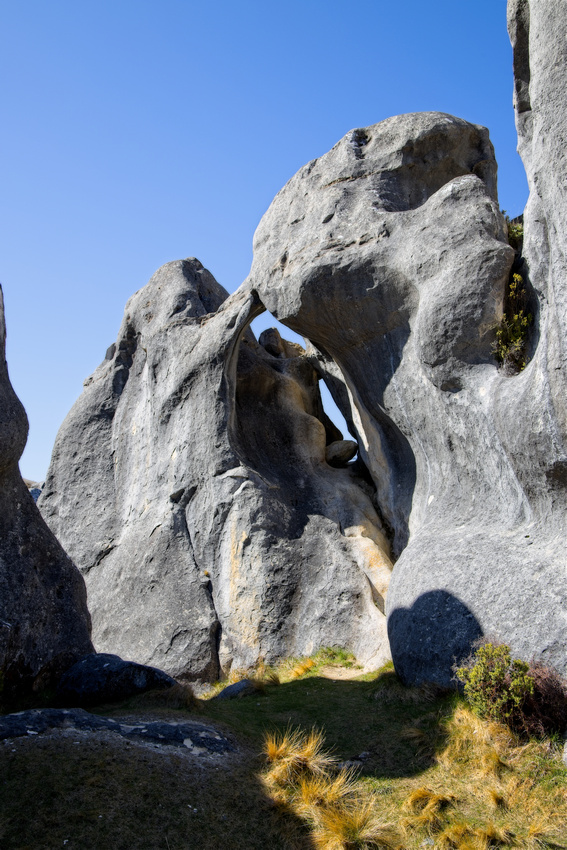 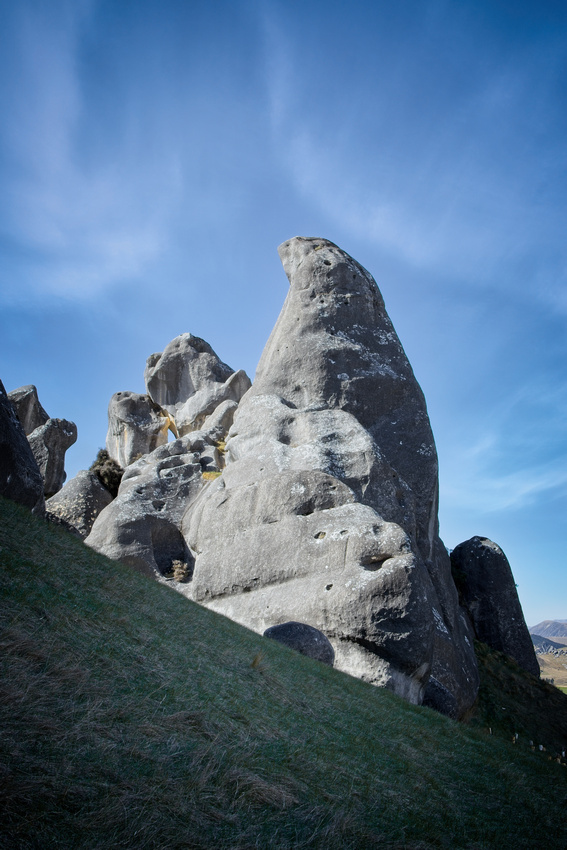 A truly iconic place and judging by the numbers of visitors and different languages spoken there truly world famous.

Most of these images are available as prints on fine art Canon papers which we print 'in house' and ship direct to you. The page for viewing the images available and ordering is here ;