The Tongaporutu Boulders and coastline.

These creations the Tongaporutu Boulders are from a time long before the internet and things Hoooman and they are such a elusive subject to even get to let alone be able to photograph as the shifting sands along this coastline can very easily bury them so that there is no trace to be seen at all. Thats after getting the low tide at the right time with out it raining and also hoping for that after storm effect of the sands having moved enough to even see them. And as well the erosion after storms can alter the coastline where by some major sea stacks can be eroded away to a pile of rubble.

My last visit culminated in getting to where i had seen them previously but all there was is these sand undulations which to seemingly be covering the boulders. It seems that when they don't want you to see them then you won't and that is all there is to it!

In this Blog have gathered all the images from a successful explore and the not so rewarding expeditions. All are available as prints with a link at the bottom.

At the start of the access to the beach where the boulders are is this archway formation and its the closest to the low tide deepest point in the beach so its a real pinch point. Its the last bit to be shallow enough to proceed so if you get the tides wrong its nowhere to go as its all cliff face all the way down. At this time the tide was at its lowest point and it was too deep to proceed. The area under the arch had been washed out so its way too deep and around the outside edge was no better. That stopped this attempt right there this time...the water was over my knees at this point so if a rouge wave caught me further out with camera bag on it would have been a tad tricky. At least the sunset was coming along nicely...

This sea stack just commands attention from any angle.It is partway down this stretch of coastline towards where the boulders are situated and i defy anyone to wander past without checking it out. One of the most common mistakes for new photographers is to go 'wow look at that' and walk all around the stack and then think of getting a unique shot of it in its pristine environment only to have all these foot prints in the sand. So consequently now always approach these subjects with a wide berth so as to not ruin any possible photo opportunities. Its a lot easier at place like this with no one around having the whole place to yourself but with a popular spot that can get problematic. Nothing like a good tide to wash everything clean twice a day. 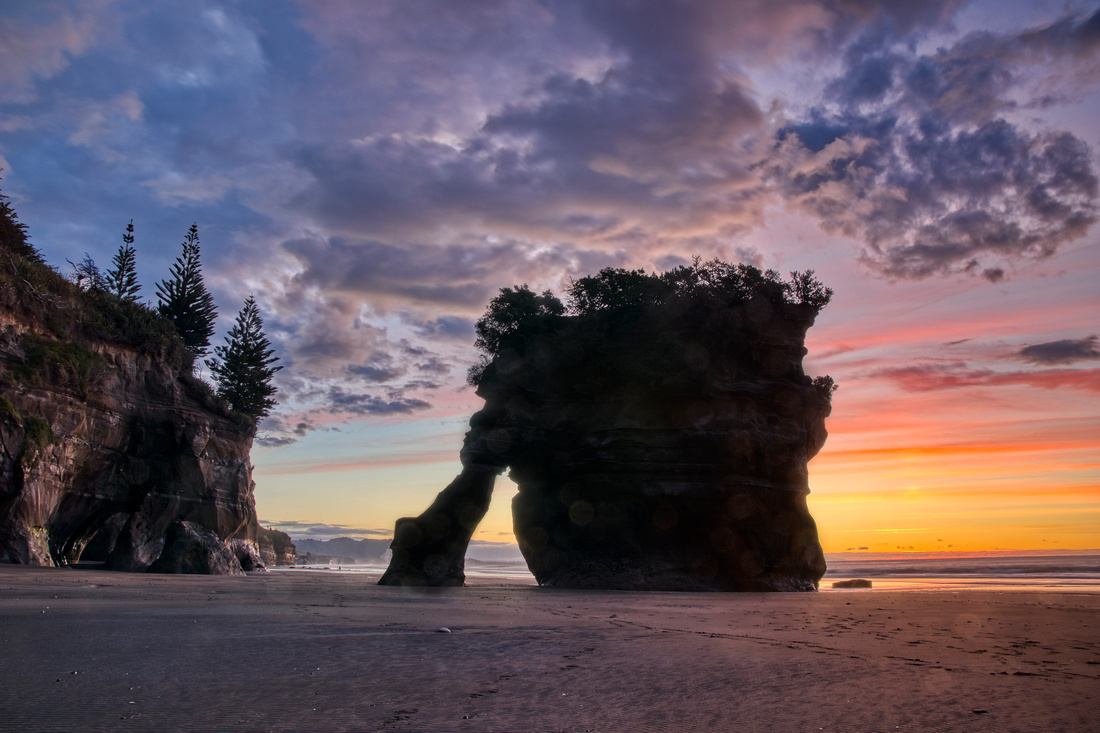 Tongaporutu coastline sea stack.A sea stack along the coastline at Tongaporutu at sunset with the gold and blue colours with the stack in silhouette next to the cliff face on that coastline.

The same specimen but from a different angle at sunset with the stack in silhouette which gives it a fatter appearance. The sunset on this occasion was spectacular and that's one thing about west coast beaches with sunsets. You don't have to get up early for them not like the east coast but that is what it is... 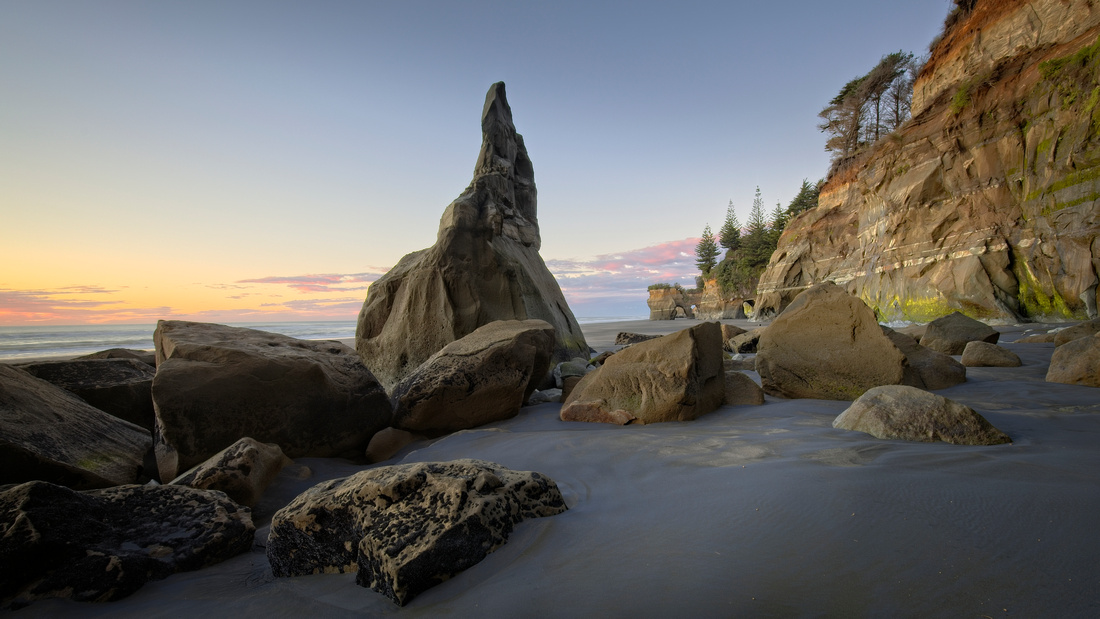 Cliff erosion at Tongaporutu.The renaments of a cliff face collapse at Tongaporutu with a jumble of rocks in the sand with one large rock with a sharp point leading to the sky at sunset.

Being a coastline that gets its fair share of storm activity and the type of rock material there is constant erosion so its constantly changing from one visit to the next. This is part of a collapse leaving a jumble of rock features but the one pointed rock form really stood out. The hard part was getting a decent composition to highlight it within the coastal landscape. This is a 3 image blend for the extreme highlights to darks created by taking a average lighting exposure with a dark and slightly over exposed image. The darker image gets the highlights in the sky and the over shot gets the details in the darker areas. Commonly called HDR or High Dynamic Range. All decent photographic software have a blending option. When in the field  it's sometimes handy to mark the end image with taking a shot with your hand in the frame to mark the sequence end. Some common mistakes with HDR is to overly crank the contrasts giving a fake look. You want it to represent what you saw at the time. 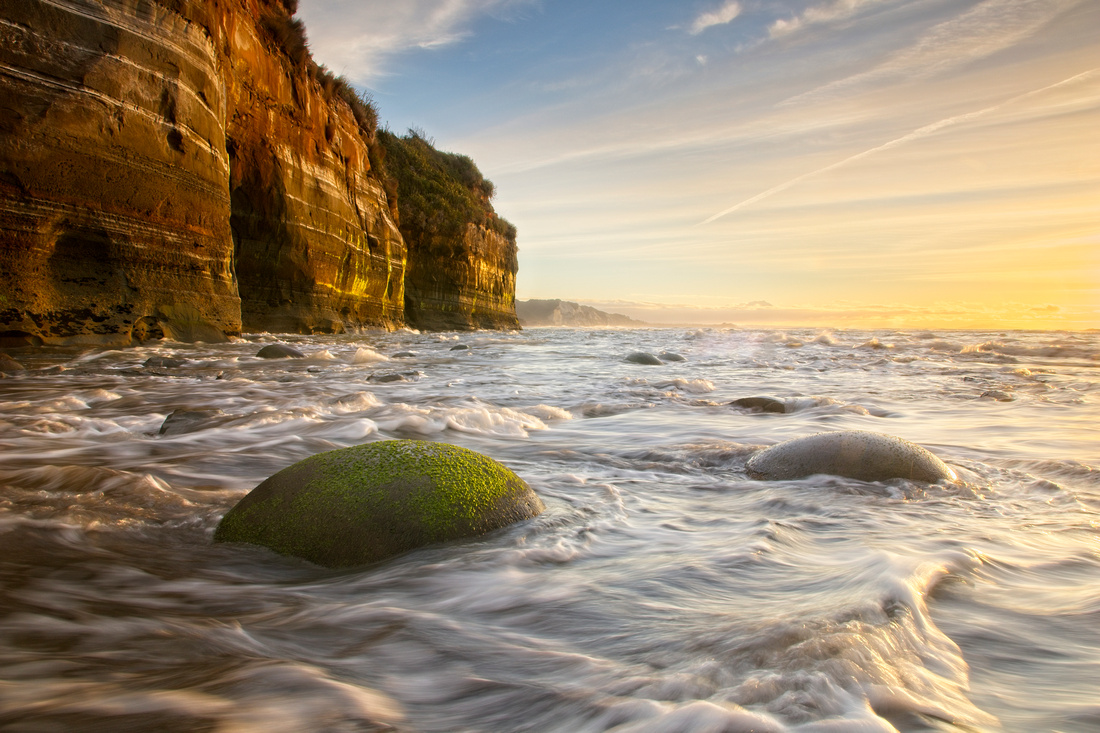 Tongaporutu coastline.The coastline at Tongaporutu is to respected for the sudden waves that wash ashore that can suddenly catch you out. Here we see the cliffs at Tongaporutu at sunset with waves crashing ashore and surrounding the boulders suddenly with the wave action displayed.

The actual boulders themselves are a illusive bunch for sure. This is with a outgoing tide but with being on the coast you never take the sea for granted and this was just a rouge wave that decided to surge back up the beach so had to quickly hold the tripod for the shot then try to scramble up the beach before the water pushed me over. There is a lot of force with rushing water and was well past worrying about keeping the socks and boots dry so its a case of creating a standing position the has the least resistance which is usually standing with the water side on. Bit tricky with a reasonable camera bag as well so you do not want to fall over! At least i got the shot ... but no shot is worth getting into trouble over.

The Tongaporutu Boulders at sunset , Taranaki north.The big round boulders of Tongaporutu at low tide at sunset.

The Round Tongaporutu Boulders at sunset.A view at sunset of the Tongaporutu Round boulders with the tidal waves washing around them with a long exposure and the cliff edge on the left of the frame.

So without a rush of tidal water this is what this beach looks like with the Tongaporutu Boulders at sunset. Methinks they out shine the other boulders in the South Island but that's my opinion until i get one day get to see those...

The Taranaki boulders at sunset with out going tide.Some large Tongaporutu Boulders with a sunset sky in the background.

Another view from the there side looking out to the sunset and the surf line. Was really lucky to catch the streak of golden light reflection on the water on the bottom left which complements the golden light in the sky.

This for want of a better term is what i would call the boulder nursery as it seems like they are uncovered from within the cliff face by the wave erosion and just appear as newly exposed boulders. There is some magical shapes and patterns on the round boulders themselves which depicts the huge pressure that was used to create them. Really liked the contrast with the Tongaporutu Boulder and the algae covered cliff face with the other smaller round rocks in the background.

Sunset at Tongaporutu beach.A view looking south with Mount Taranaki in the far distance of the Tongaporutu coastline at a very low tide at sunset with the beach exposed with pools of water left in little pools of water after the receding tide.

This is the same area at the last visit. Not a boulder to be seen anywhere. You can't tell me they all rolled away. That would be silly. But imagine the storm force to move all that sand to expose them and also to cover them again. It seems that mother nature decides if you are worthy this time to see them after getting the tides and weather to suit which in itself is a bit of a mission. Still ...nothing worthwhile was that easy.

Sunset sand with patterns.Looking out to sea from the Tongaporutu coastline with the sun nearly set below the horizon over pools of water left behind from the receding tide.

Not a boulder to be seen but these indentations in the sand. Still it makes for a not to shabby sunset image....

Foot prints in the sand.At sunset on a wide open beach at low tide with a wide view of the cliffs at Tongaporutu on the left running down towards Mount Taranaki in the far distance with also the footprints leading towards the mountain.

This is one time that leaving foot prints in the sand does work as it makes for a decent leading line towards Mount Taranaki in the far distance at sunset. That was more by accident than design as was walking back to the car park and wasn't too worried about leaving prints behind me. But you should always look back as the photographers adage goes... 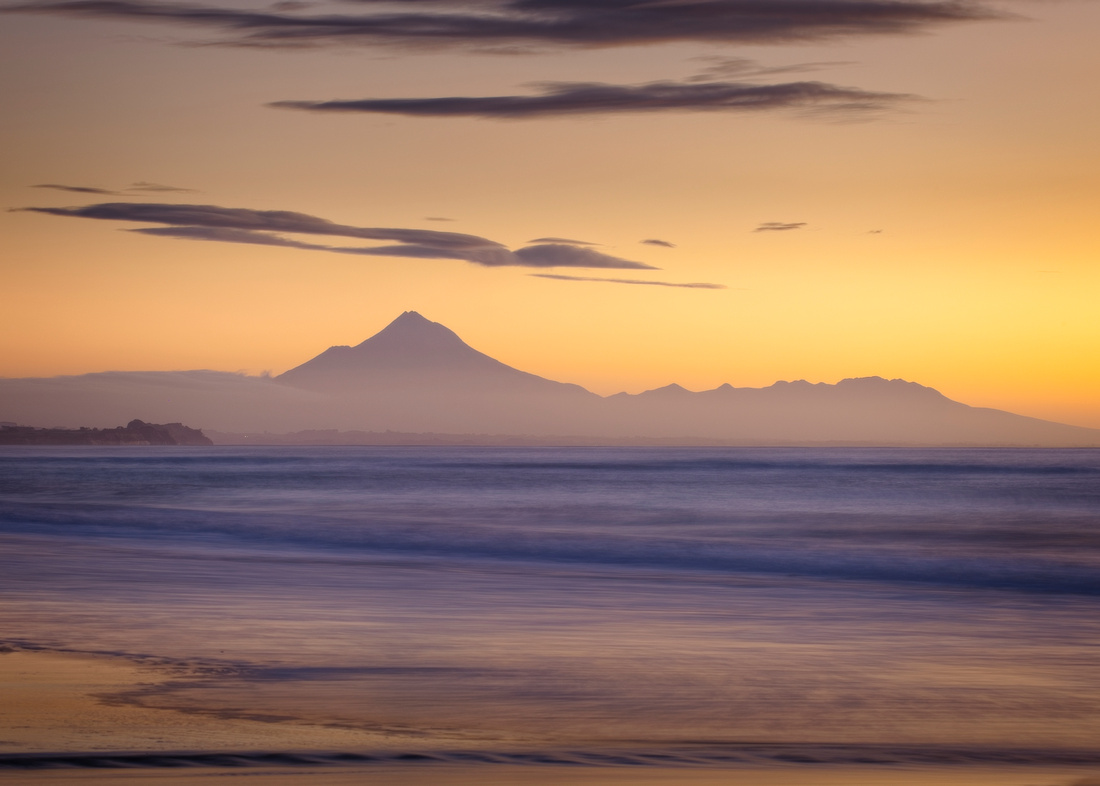 Mount Taranaki sunset over the sea.Looking from the Tongaporutu coastline at Mount Taranaki at sunset with golden light over the intervening sea with the surf line in the foreground.

Also with a low tide and a golden sunset means that a image of Mount Taranaki is in the offering. Created a slower speed exposure to just blur out the surf line just a little to add to the ambience.

Another interesting rock feature was this hard rock being slowly eroded out of the cliff by the high tide waves with this bright green algae adding a colour contrast. It was being kept wet by fresh water flowing down the face of the cliff.

Dusk with stars and rocks at Tongaporutu.A night image made just after sunset with the lingering sunset colours on the horizon with a group of rocks on the fore ground at the beach at Tongaporutu at the tides edge with the surf line blurred with a longer exposure.

At the end of the day hung around for awhile to try for some night images. There was a fishing boat just over the horizon which added just a glint of light in the middle waterline and the rocks on the shore line added just the right complement with the early stars above.

All these images are available to order as prints. Just go to the Taranaki page and by clicking upon your preferred image the printing options are available for you.